With the voiding of the term of Lourdes Sereno as chief justice, JUSTICE TERESITA J. LEONARDO-DE CASTRO thus became the first female Philippine Supreme Court Chief Justice on August 28, 2018. This article explores the surnames of CJ de Castro as well as present a brief genealogy. 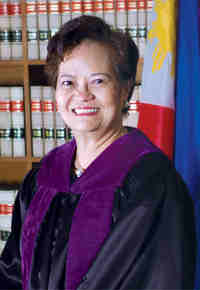 The newest Chief Justice of the Supreme Court of the Philippines, JUSTICE TERESITA J. LEONARDO-DE CASTRO, carries very significant family names. She is unique in the sense that both her maternal and paternal surnames - JOSE and LEONARDO - are more popularly carried as first, and less as last, names.

Her maternal surname, Jose, is derived from the Spanish and Portuguese name JOSÉ, itself from Ioseph, the Latin form of the Greek Ιωσηφ, which is taken from the Hebrew name Yosef meaning "he will add". Her paternal surname, Leonardo, on the other hand is from the Italian, Spanish, and Portuguese name Leonardo which is derived from the Germanic lewo, meaning "lion" (of Latin origin), and hard, which means "brave, hardy".

Even her married surname, de Castro, stands for something lofty. It is derived from the Galician, Portuguese, Italian, and Jewish (Sephardic) topographic name Castro, from the word castro which means “castle” or “fortress” and derived further from the Latin castrum which means “fort” or “Roman walled city”.

It is interesting to note that the Jose, Leonardo, and de Castro families are all local to the City of Parañaque. While both the Jose and Leonardo surnames are common Filipino names, both surnames have existed in Parañaque way before the Claveria surname decree.

The Leonardos of Parañaque were classified as indios and belonged to the gremio de naturales. All their relatives were also classified as such. The earliest traceable ancestor of Chief Justice Teresita L. de Castro on the paternal line is ESCOLASTICO LEONARDO who was born in Parañaque, Metro Manila, Philippines. He married Juana Santos and at least one child has been recorded so far: Sinforoso Leonardo. While it is not indicated if he carried a position in the locality, in later records Sinforoso Leonardo was listed a few times with the title “Don”. It is very highly likely that he was an elected cabeza de barangay.