Despite the recent dressing down of Cebu City Mayor Tomas Osmeña by President Rodrigo Roa Duterte, the Duterte and Osmeña families have always been allies and connected.

Mayor Tomas Osmeña and President Duterte also served as city mayors of their respective cities from1988 to 1995, then from 2001 to 2010. 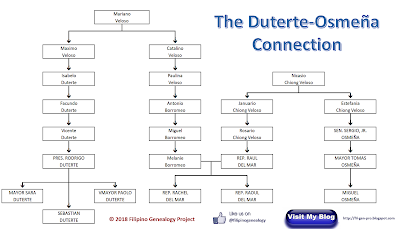 But the most interesting tidbit is this: President Duterte's fourth cousin, Melanie Borromeo, married Mayor Osmeña's second cousin, Raul del Mar. Which means that not only are Duterte and Osmeña cousins-in-law, their children are blood cousins of the children of Raul del Mar and Melanie Borromeo.

Philippine politics truly is a tangled web of family affairs.
Posted by Filipino Genealogist at 11:09 PM