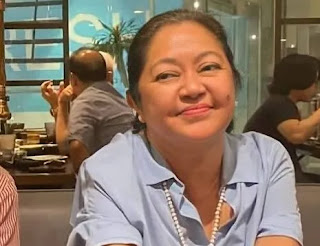 A recent article online which was obviously released to malign incoming First Lady Louise "Liza" Cacho Araneta Marcos, and in effect also take a cheap shot at presumptive President Ferdinand Romuladez Marcos, Jr., was brought to me attention since there was a brief genealogical revisionism found in the article. It read:

Liza's father, Filipino basketball Olympian Manuel Araneta Jr., is a distant cousin of Judy Araneta-Roxas, the mother of former Senator Mar Roxas. Liza's family residence was in Cubao where Mar's family mansion is also located which explains why the two are reportedly close to each other.

This short but very blatant genealogical error clearly shows either the writer being lazy with his research or trying to wrongly illustrate Atty. Liza Araneta-Marcos as a "poor" relation of the Aranetas.

Whatever people say, records and genealogies available prove that the pedigree of our incoming First Lady is extensive and established. On her Araneta side, she can trace up to eight generations, while on her maternal line, she can climb 13 generations up the family tree. Aside from the Cachos and Aranetas, she can count as her relatives, whether near or far, the Cojuangcos, the Aquinos, the Pardo de Taveras, the Marcoses, the Macapagal-Arroyos, the Roxases, and many more. 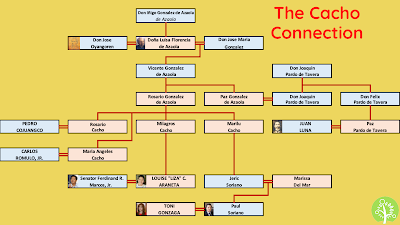 Her maternal side, the Cachos, are one of the most connected families in the Philippines. They all descend from Luisa Azaola, the widow of Davao City’s founder, Don Jose Oyangoren (interesting connection since BBM’s VP is Davao Mayor Sara Duterte). After the death of Don Jose, Luisa remarried to José María González y Brenes. Descendants of Luisa Azaola include:

On the other hand, Liza is a member of the House of Araneta, one of the most powerful families in the Philippines where four members married into Presidential families:

The family tree above (click to enlarge) clearly illustrates that the above mentioned article was wrong to say that Liza Araneta Marcos is a distant relative to the Araneta-Roxas family. She is, in fact, a second cousin of Mar Roxas, her father Manuel Araneta, Jr. being the first cousin of Mar’s mother, Judith “Judy” Araneta. The most interesting connection of the incoming First Lady is this: even before her marriage to President-elect Ferdinand R. Marcos, Jr. on April 17, 1993, her aunt, Maria Teresa Araneta, married Manuel Abad Lopa, Jr. in 1956, whose brother, Ricardo A. Lopa, would marry Teresa Cojuangco, sister of Corazon Cojuangco Aquino, who would later become President of the Philippines. Interestingly, during the Araneta-Lopa nuptials, one of their sponsors was Daniel Romualdez who in 2 years time would become Speaker of the House of Representatives. In another interesting genealogical twist, this same Daniel Romualdez married Paz "Pacita" Gueco, the first cousin of Ninoy's father, Benigno Aquino, Sr. Thus, incoming First Lady Liza Araneta-Marcos is related to the Cojuangco-Aquino family on both her maternal and paternal sides, with the added twist that her husband's maternal family is also related to the Aquinos.

Clearly, Liza Araneta is not distantly related to the Araneta line of Mar Roxas, as the article stated, but is still closely related being the second cousin of Mar.

The House of Araneta, after all, knows and has accounted for all its members.