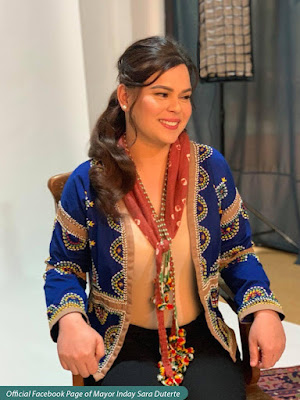 Inday Sara is a product of the East and the West, having German, Spanish, French, Chinese, and Filipino ancestries. Her genealogy is even more interesting. She is an ABELLANA from her mother's side, as Elizabeth Zimmerman's mother was an Abellana from Cebu. A lore in the Abellana family says that they are putative descendants of Hari' Tupas, the son-in-law of Hari' Humabon. This lore is also discussed in Manuel Enriquez de la Calzada's book "Ang Kagubot sa Sugbo 1898" which narrates the invaluable assistance to the Spaniards of several soldiers from San Nicolas, Cebu, which was always believed to be the seat of Hari' Tupas and where his descendants lived. All these soldiers, led by a Captain Celestino Abellana, were descendants of Tupas and were later rewarded by the Spanish authorities with exemption from tribute as well as having their names etched on a pliego de bronce or bronze sheet which was displayed in prominence inside the the church of San Nicolas. 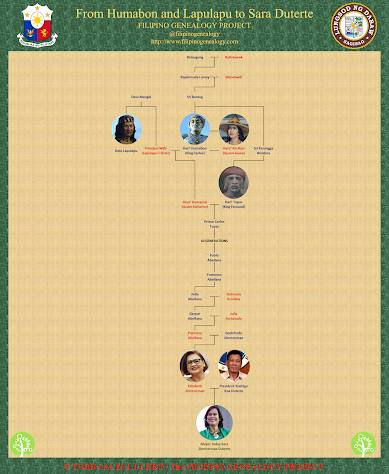 The ABELLANA family name has always been considered a Cebuano family name. In fact, it was awarded as one of the Pinalanggang Sugbuanong Banay or Most Beloved Cebuano Families in 2012 together with 74 other Cebuano families. This distinction was given to families who had members who were successful in their respective field before 1965 and many of them were also very prominent since during the Spanish period (Philippine Daily Inquirer, 2012).

A few of the prominent Abellanas in Philippine history were Martin Abellana, the LUDABI (Lubas sa Dagang Bisaya) and “Ang Dagang Bisaya” editor who was born in San Nicolas, Cebu City in 1904; Andres Abellana, a former capitan of the San Nicolas district of old Cebu who, together with his brothers Fabian and Lucas Abellana, were actively involved during the Philippine revolution against Spain in 1898. The three brothers were arrested by the Spaniards after the historic Tres de Abril battle. Andres Abellana's son, Hilario Abellana, became a governor of the province of Cebu (1941-1943).

Historically, the Abellanas have always been considered a true-blue Cebuano family. Legend has it that they are direct descendants of Hari’ Humabon of Sugbu through his grandson, Hari’ Carlos Tupas. This belief is held by almost all members of the Abellana family and is most likely rooted to the fact that, historically, the Abellanas have always been prominent in what is now San Nicolas in Cebu City, said to be the seat of Hari’ Humabon’s kingdom.

So when I found out that Inday Sara was an Abellana through her mother, Elizabeth Abellana Zimmerman, I immediately realized just how huge the historical and genealogical significance was had she decided to run for the Presidency. Consider these: the year 2021 is the 500th anniversary of the introduction of Christianity in the Philippines. The primary players 500 years ago were Magellan, a Portuguese in the service of the Spanish crown; Hari’ Humabon, who welcomed the Spaniards; Lapulapu, who fought valiantly against the colonizers. Had Inday Sara decided to run for President, she would have been the convergence of all that happened 500 years ago. Her father, the current President, is actually from a family that has always maintained Portuguese descent on one side and Spanish lineage on another. Inday Sara’s mother is a direct descendant of Hari’ Tupas Kamparang and Hara’ Humamai, whose father was Hari’ Humabon and whose mother was a sister of Datu Lapulapu. Inday Sara’s running for President would not just have been an answer to the clamor of the people; it would have been the sacred fulfillment of a destiny carved into Philippine history half a millennium ago.

Posted by Filipino Genealogist at 7:30 PM