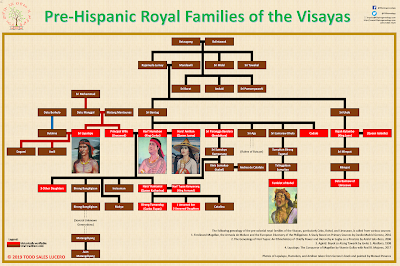 As an improvement to the genealogies of Humabon and Lapulapu discussed in previous posts, this new tree explores the connection between Rajah Humabon and Sri Lapulapu. That Humabon was Lapulapu's brother-in-law is actually backed by both archival documents and oral history.

It is true that documentation on the Visayan pre-Hispanic royalty is fewer than that of the Lakans of Luzon. Because of this, we know very little of the royal families of the Visayas. We also do not have proof of where their descendants are today. This is where oral tradition comes in to fill in the void, and where clues left by what little archival document we have complete the story.

One interesting factoid in the family tree of pre-colonial Visayan Royals is that the Abellana family of Cebu claims to be descendants of Tupas, Humabon's nephew and son-in-law and eventual successor. President Duterte's ex-wife's, Elizabeth Zimmerman, mother was Purisima Abellana, born in Tuburan, Cebu. While we have no way yet of proving her Abellana line to be related to those of San Nicolas, Cebu City's, further research just might shed light on the possibility of Duterte's children being descendants of pre-Hispanic royalty. It would be tantalizing to also compare this with PGMA: her father's family was from pre-Hispanic native royalty, and she later became president herself. If Sara Duterte were descended from Tupas, well, then, you make the conclusion.

Naturally, this does not make any claim of authenticity. There was a need to delineate between archival documentation and purely oral history to make sure people understand that the chart simply is an amalgamation of various sources on Humabon and Lapulapu.

Posted by Filipino Genealogist at 10:41 AM