The Euskaldunak: All in the Family

Although they keep a low profile today, too low a profile some would say, their presence cannot be ignored nor forgotten. For centuries, this small group of people have made their mark in the growth of the Philippines as a nation. While many Filipinos today lump them together with the rest of Spain, they maintain a distinct and quite separate an identity as a people. They are the Euskaldunak, the Basques. Seafarers, merchants, conquistadores, and nation-builders. In Spain, while their homelands were incorporated into the Spanish kingdom, they remained a separate group of people. In the Philippines, while they could often be mistaken for a Spaniard, their ever mellifluous, often unique names would make them stand out. 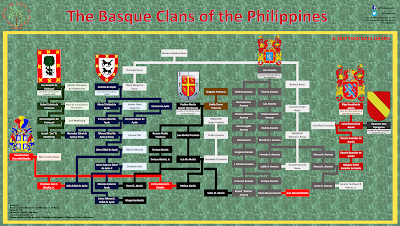 As with previous articles, this post is a demonstration of the interconnection of families in the Philippines, in this case, the Basque Descendants of the Philippines. It is interesting to note that like many cases of family connections, those who are descended from the Basque immigrants in the 1800 to 1900s are also related to one another, some many times over.

Looking at the family trees of Basque clans in the Philippines, one can see how much intermarriages there have been in the last few years. While the early Basque immigrants usually married into families from their own Basque province, the recent generations have not followed the same patterns and has married those from other provinces, albeit still from the Basque country.

For instance, the four major Basque clans of the Philippines include the Aboitiz, Ayala, Elizalde, and Ynchausti families. They represent the four provinces of the Basque country in Spain: Araba, Bizkaia, Guipúzcoa, and Navarre. We add to this another Basque clan, the Aranetas, who also hail from Guipúzcoa. One of the earliest merging of Basque families was the marriage of Mercedes Zobel de Ayala y Roxas, a great-granddaughter of Don Antonio de Ayala, founder of the Ayala clan and fortune in the Philppines, and Joseph "Joe" R. McMicking, the great-grandson of Don Jose Joaquin de Ynchausti, founder of Ynchausti y Compañía. A major stakeholder of this company were the Elizaldes, who also intermarried into the Zobel de Ayalas: Francisco Jose Elizalde, Jr. to Sofia Zobel de Ayala. The Elizaldes, meanwhile, also intermarried into the Aboitiz clan: Francisco Jose's brother, Carlos Antonio, married Melissa Aboitiz, who is not just an Aboitiz but also the great-granddaughter of former President Sergio Osmeña. The Aboitizes also married into the Zobel de Ayalas: siblings Mariana Zobel de Ayala and Jaime Alfonso Zobel de Ayala married cousins Danel C. Aboitiz and Margarita Aboitiz, respectively.

Interestingly, Louise Araneta's mother, Milagros Cacho González de Azaola, was the great-granddaughter of another Basque, Luisa Florencia de Azaola who was married to another Basque, Don Jose de Oyanguren, founder of the province of Davao.

Of course, there are probably more intermarriages among these families and many more other families of Basque descent. However, in just these famous clans, we have already seen at least 8 intermarriages. The Basques clearly are an interesting sub-group in the Philippines. Though there are just a few of them, they are, collectively, very influential and worth billions of pesos.


Truly, just like other family trees, the Basques of the Philippines belong to one big family tree.