Did Your Family Adopt its Surname?

Did Your Family Adopt its Surname? Tips on Finding Out Whether Your Family Name is Original or Adopted

Many in the past always automatically assumed that having a Spanish-sounding family name meant that they had a Spanish ancestor. This is even quite prevalent today. However, time and again it has been proven than not all surnames are authentic Hispanic last names. In fact, as many now have realized, Claveria's 1849 surname decree has left many Filipino families with the illusion of having Hispanic roots, but in reality, their surname is merely a byproduct of the decree. Of course, while many families adopted or were assigned a family name, this does not automatically mean they could not have a Spanish ancestor somewhere up in their family. So, the safest rule of thumb is this: though not all families with Spanish-sounding last names have a Hispanic ancestor, this also does not mean that they do not have one or two in their family tree. As always, it is necessary to prove one's family's claim through research and documentation. In this article, we look at several ways to see if one's surname was replaced or adopted because of the Claveria decree.

Many people think that just because Governor-General Narciso Claveria y Zaldua promulgated the surname decree on November 21, 1849, people all over the colony began to officially use a family name immediately right after the decree was made. In reality, the decree was not automatically implemented. Typical of the bureaucracy at the time, Claveria’s successor, Antonio María Blanco, had to reinforce the decree and therefore there was a few months’ delay in its actual enactment. Thus, when trying to see if one’s surname is a product of the Claveria decree, one has to note that the actual implementation started around March to June 1850. The reason for the range and not a specific date is due to the difference in the immediate implementation of the decree throughout the archipelago. Some started as early as March while others dragged on with the usual practice until about June of 1850.

When researching one’s family name’s provenance, take note that there is a window of about ten years in most places where one can discern the origin of one’s last name. Focus only on the years 1850 until about 1860, as these are the years where one is most likely to confirm if one’s surname is a Claveria decree by product. There are some municipalities that have longer timeframes, but these unique places are usually the exemption rather than the rule.

Strategy 1: Look at the Notation on the Margins of Parochial Records

If one is lucky to have ancestors coming from towns where the parish priests followed the Claveria decree to the letter, then this first strategy is for you. Many do not know that number 7 in the Claveria decree specifically instructed the towns and parishes that a list of the inhabitants be prepared showing the following: their given name, followed by the family name they have adopted in accordance with the decree, and then followed by the “surname” the person has been using before the decree. The word surname is in quotation marks because not all inhabitants had surnames; in fact, many used a second Christian name after their baptismal name so there were many Maria Concepcions, Jose Franciscos, and so on in one place alone.

Number 19 of the decree further instructed the parish priests to write on the margins of the canonical records the same information as was indicated in number 7 of the decree. See below for a sample.

In this example of a baptismal record from Dingras, Ilocos Norte, from 1878, the name of the child (see upper righthand corner of the record), VITO, is followed by Resureccion, and then by Lazaro. This is just one of the examples of a clear proof of the adoption of a new surname because of the Claveria decree. “Resureccion” is the adopted, formalized last name, while “Lazaro” was the second name of the family of VITO before the decree. The towns in both Ilocos Norte and Sur, though not all but most, seemed to have followed the instructions in the decree faithfully. But, like most cases, Ilocos is an exemption. It would appear that Ilocos’s population was on the verge of making the use of surname official even before the Claveria decree. Around 80-90% of the families in Ilocos by the time of Claveria’s surname decree were already using their father’s second name as a sort of surname, and there was already documentation of many families that have started passing down their “surnames” to the next generation.

If you do not see such notations on the margin of the church records of your hometown, then the second strategy might work for you.

Strategy 2: Look in the body of Parochial Records

While not all parishes followed the decree to the letter, some did still manage to record the old surnames used by their parishioners prior to the decree. In limited instances, the priests noted the new and original surname of the people into the actual body of the record. See below for example. 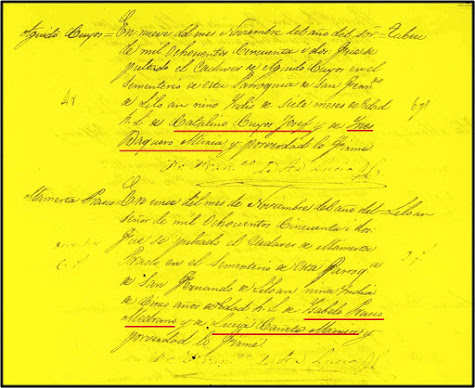 In the burial record above from 1852, taken from the church archives of Liloan, Cebu, we see that the deceased’s parents, who would have been alive prior to Claveria’s decree, are listed with their original second name. In the first entry, the deceased’s father is Catalino Cuyos Josef, indicated that Cuyos is the new and adopted name while Josef was the pre-Claveria name. The same is true for the entry below, although this time the father’s old second name, Medrano, is actually also a surname. Thus, the Frasco family of Liloan, Cebu, known for Titay’s Rosquillos, who are descendants of the abovementioned Ysabelo Frasco Medrano, used to have Medrano as their second name until changing it to Frasco after Claveria.

If the second strategy still does not yield anything, try poring through records at the Philippine National Archives, especially the ones with a list of inhabitants or local functionaries. See below for examples. 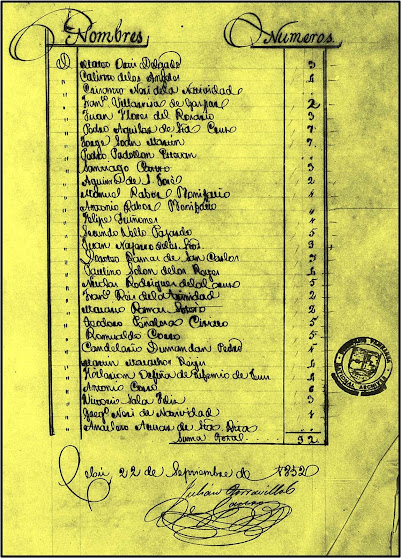 This first example is an 1852 record of the count of exempted individuals per barangay with the names of the cabezas de barangay listed. Thee are clear examples of families that changed their family names, such as Juan Flores del Rosario, Pedro Aguilar de Sta. Cruz, and Manuel Rabor Bonifacio, clearly indicating that Juan's, Pedro's, and Manuel's new surnames in compliance with Claveria's decree are Flores, Aguilar, and Rabor, respectively, replacing the old second names del Rosario, de Sta. Cruz, and Bonifacio, respectively.

However, there are also others like Santiago Castro, Felipe Quinones, and Romualdo Corro who appear with just one surname, perhaps an indication that they have retained their old surname. 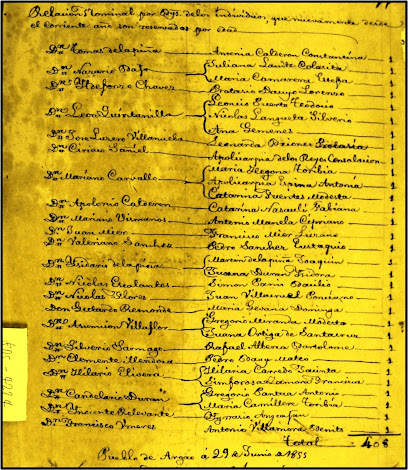 In this second example from Argao, Cebu from 1855, still an inventory of exempted individuals from tribute due to age (reservados por edad) the exempted individuals are listed down. Almost all of the exempted individuals here, who are all above 60 and thus were born way before Claveria’s decree. In Argao’s case, however, only a few families practiced the use of a constant second name which acted more or less like a surname. In the above list, all the listed second names were simply that, a second name, and not a family name. But, this list, as the one above, proves that almost all families in town adopted a surname to comply with Claveria’s decree.

Not everyone is lucky enough to have ancestors from towns with such able parish priests who followed the surname decree down to the last letter. So if none of the above techniques work for you, then you do have to do it the hard way. This will be my next topic in a future post.

Posted by Filipino Genealogist at 1:20 AM