President Duterte and the Genealogy of Power

There is a theory in America called the Most Royal Candidate theory. This is a term given to the fact that every presidential election, except one, in the United States has been won by a candidate descended from King John Lackland Plantagenet. The theory further suggests that the presidential candidate with the most number of traceable royal ancestors wins the election.

Of course this theory has met a lot of criticisms. But regardless if this theory actually makes sense or not, one thing is for certain: proximity and access to the base of power - in this case to "royalty" - is almost always a sure win for the candidate.

In a previous article, which took me about 5 years to complete and revise many times, I illustrated the interconnectedness of Philippine politics: from Aguinaldo to the BS Aquino several lines of relationships, whether by marriage or blood or both, connected most of those who are in power. Now, many years after that article was first conceived, I have yet again found more interesting connections between and among all 16 of our presidents.

It is admittedly an accepted fact that everyone is connected one way or another, whether by Six Degrees of Separation of through genealogy. But I am still amazed at the connections I saw once I put together the family trees of all 16 of our presidents. In this article, I propose the Genealogy of Power principle where we will see which of our presidents and other prominent figures have the strongest connections with the bases of power. This is different from the Six Degrees of Separation principle, which states that in most instances two people can be connected to each other by six degrees or less. For instance, the friend of Baste Duterte, the son of PDU30, is connected to former dictator Ferdinand E. Marcos by just 4 degrees since Digong's father, Vicente, knew President Marcos personally and even worked under him. My Genealogy of Power principle depends only on the genealogical connections of people which often means more in this country than anywhere else.

So, using the genealogies of all 16 presidents and other families with influence, we can assign corresponding points of relationships between 2 people (see Genealogy of Power table above). For instance: 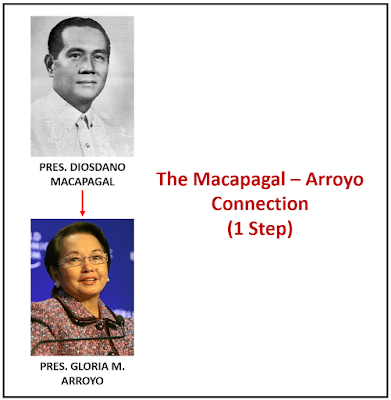 As seen in the genealogy of power matrix, colors have also been assigned to the closeness of relationships aside from number. For example, Marcos and Ramos are connected through just 5 relationships, being 2nd cousins, thus making their relationship extremely high and thus shaded red. Same with Aguinaldo and Aquino, who have very close relationships. 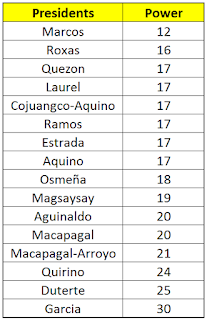 If we were to assign this "genealogy of power" relationships to all 16 presidents, we get some very interesting insights. The top 2 most "powerful" families using our genealogy of power matrix are Marcos and Roxas. The Marcos family, on average, is separated from all presidents by just 12 connections, while the Roxases just by 16. Tied on third "most powerful" spot are the Quezon, Laurel, Cojuangcos, Aquinos, Ramoses, and Estradas. Simply put, most, if not all, of these families are what we can consider strongly related to the bastions of power in imperial Manila.

On the opposite side, we can see that Quirino, Duterte, and Garcia are the last 3 families with close proximity to power. Thus, it is clear that our current president, Rodrigo Duterte, is truly far removed from the cluster of powerful families, separated on average by 25 relationships to any of the presidential families.

Connection with PDI, ABS-CBN, and MINING 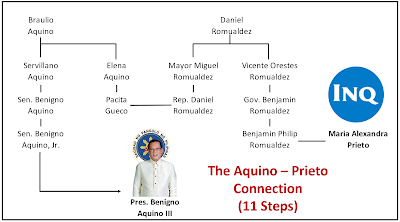 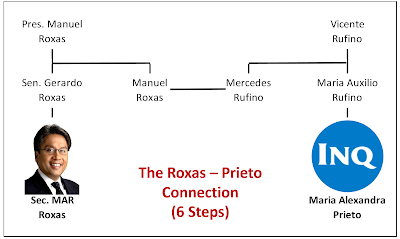 Clearly, no matter how you look at it, President Duterte is a true outsider of imperial Manila. He is also so far removed from the oligarchs, as seen in his 20 or more connections that separate him from the Philippine Daily Inquirer (PDI), ABS-CBN, and the mining industry. PNoy and Mar, on the other hand, are very close to these symbols of Philippine oligarchy.

I wanted to further connect PDU30, PNoy, and MAR with other figures in history to test my theory further. First, with Pedro Paterno, known to Philippine history as the original turncoat or, in Filipino, balimbing. Historian Ambeth Ocampo wrote:


"Remember, Paterno was one of the greatest "balimbing" (turncoat) in history (perhaps he was the original "balimbing" in Philippine political history). He was first on the Spanish side, then when the declaration of independence was made in 1898, he "wormed his way to power" and became president of the Malolos Congress in 1899, then sensing the change in political winds after the establishment of the American colonial government, he became a member of the First Philippine Assembly."

And since Pedro Paterno is related by blood to former Senator Jamby Madrigal who recently made news when she was accused of trying to bribe the inmates who accused Senator Leila de Lima of protecting the drug trade in Bilibid prisons, she will also be connected in the charts. 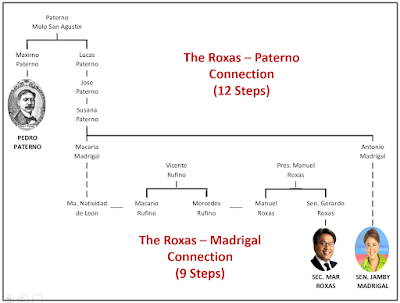 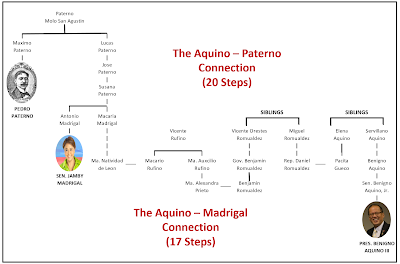 Obviously, once again, President Duterte is quite distantly related to the Paternos and Madrigal, two of the richest families in the Philippines even since the Spanish period. No wonder, then, that various nefarious groups and individuals have been seeking for PDU30's ouster left and right. For the first time in our history since another outsider, Carlos P. Garcia, was president, an ordinary man has been given the mantle of power by the Filipino people. This is why they want Duterte out. These people, whose genealogies situate them near the power bases, believe that they have the monopoly of ruling the country. As the genealogy of power matrix shows, those who are closely related have ruled this nation for most of our history. Duterte, who is too far removed from these powerful clans and oligarchic institutions, is a real threat to these people.

But what they do not know is that not only does Duterte have the support of the ordinary citizens, he too has the historical mandate based on his connections to our heroes. I was also playing around with another theory when I wrote this article. I surmised that a "good" president is nearer genealogically to Philippine heroes. So, I chose Jose Rizal, Andres Bonifacio, and Lapu-Lapu and connected them with PDU30, PNoy, and MAR. And the results were truly amazing!

When connected to Andres Bonifacio, arguably the favorite hero of our leftist brethren and considered by some historians as the rightful first president of the Philippines, we see that hands down, President Duterte is the closest. He is 8 steps away from Andres Bonifacio, whose wife's great-great-aunt, Leonarda Alvarez, was married to Facundo Duterte,President Digong's grandfather. PNoy is a distant 21 steps away while MAR is 18 steps from Bonifacio. 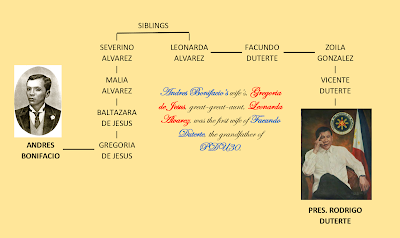 And when connected to Jose Rizal, we still get the same result. President Duterte is still the one with the nearest connection, with 15 steps away but double the connection this time; meanwhile, both Aquino and Roxas are 20 steps away from the Philippine national hero. 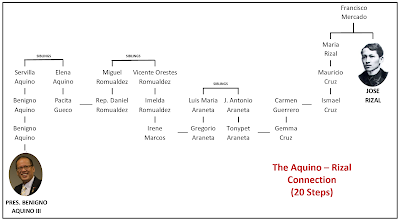 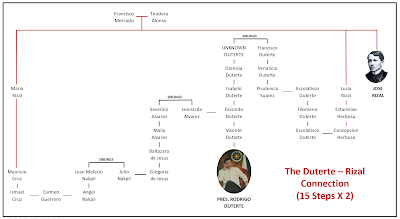 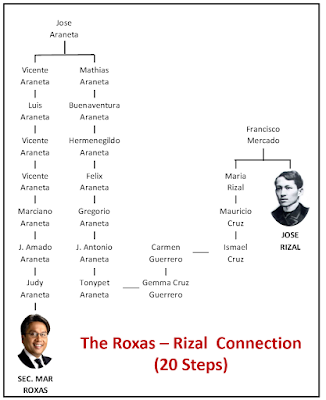 While Lapu-Lapu is known as the first hero of the Filipinos, very little of his genealogy is actually known. What we do know today is that some old families in Mactan are serious about their claim of being descended from them. One of these is the Dimataga family. So this family will be our basis in our connections. 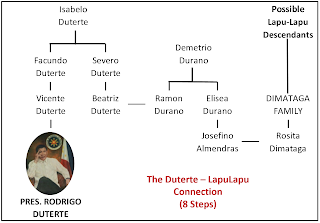 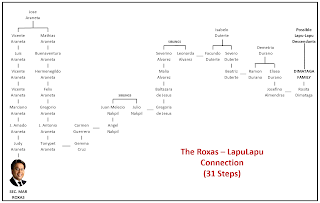 It does seem fantastical and far-fetched, but the genealogical charts do not lie. Digong is the president with the nearest connection with our heroes with just 8 steps away from Andres Bonifacio, 15 from Jose Rizal through double connections, and just 8 connections apart from the Dimataga family of Mactan, one of the families believed to be descended from Lapu-Lapu. PNoy, on the other hand, is 21, 20, and 31 connections apart from the 3 aforementioned heroes, while MAR is 18, 20, and 31 steps away!

Rodrigo Roa Duterte may not be to the manor born and may be too far removed from the country's ruling elite, but among all presidents, he is the one with the closest connections to Lapu-Lapu, Rizal, and Bonifacio. Men who fought not just for the ruling class, but for every single Filipino. In the end, it is clear that history has chosen Duterte to be the inheritor of the greats of our past.