The Caminero family of Argao is one of the latest additions to the town's list of political families. One of its members, Wilfredo Sardedo Caminero, ran for and won as councilor of Argao from 1988 to 1992. In 1992 he became the running mate of Mayor Daniel Sesaldo and was a two-term vice-mayor of the town until he himself was elected mayor in 1998. He served in this position until 2007. He currently serves as one of Cebu's provincial board members.

Wilfredo's brother, Guillermo Jr., followed in his footsteps when he ran as a councilor of Argao in 2007. In 2010 he ran for a second term with another brother, Stanley, as vice-mayor. They both won. Wilfredo's son, Aladin, also won as the Sangguniang Kabataan (SK) president of barangay Poblacion, then went on to win the SK Federation presidency, and then finally became an ex-officio member of the Provincial Board of Cebu when he was elected chairperson of the SK Federation of the province. Another Caminero, Pedro F. Caminero, Jr., sits as the mayor of the municipality of Padada, Davao del Sur.

The family began in the southern portion of the town and the earliest members of the clan most likely lived in Balaas. The surname Caminero was one of the 750 surnames adopted in town during the 1849 Claveria decree. The family has claimed that they changed their surname from Camerino (another surname in Argao) to evade Spanish authorities but records show they have always carried the surname since the Claveria decree. Although it is one of the largest families in town it is concentrated in only 13 barangays, and only 5 of these have more than 30 members found. And even with its vast size even during the Spanish period they can all be traced to the couple Juan Caminero and Francisca Sidlacan, who both lived sometime in the first quarter of the 1700s.

CAMINERO Family Name Distribution in Argao (as of 2011) 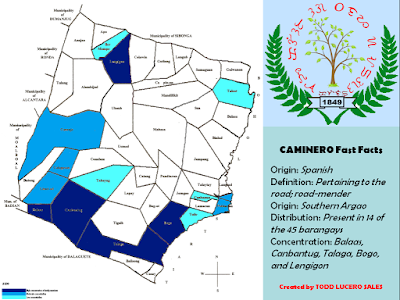 Posted by Filipino Genealogist at 1:21 AM