The Kintanars: Kith and Kin

The Kintanar family of Argao, Cebu, Philippines is one of the most prominent families in the municipality 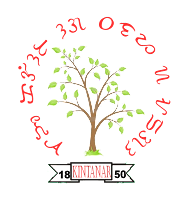 Because it is also one of the oldest, pre-American period families found in Argao, its earliest history is a little difficult to reconstruct. According to its family’s chronicler, Mr. Renato Y. Kintanar, “the first man in Argao to adopt the name QUINTANAR was a carpenter from Talisay, Cebu who went to this town to take part in the construction of its Catholic church. Gualverto was as yet surnamed after his father Simeon in accordance with the practice of the time” (from Kintanar Family Tree by Renato Y. Kintanar, 1971). This assumption, presumably taken from oral accounts, is difficult to verify.

To begin with, Juan Gualverto, in various documents pertaining to his grandchildren, was consistently described as indio natural de este pueblo de Argao, which indicates that he was native to the town of Argao and not from Talisay. As for his being a carpenter, again this is difficult to verify as there are no records to support that he was ever a carpenter. During the 1800s, the artisan class was firmly established in a few families and as there never was a Quintanar described as a carpenter or blacksmith or any other artisan-related profession, it is safe to conclude that Juan Gualverto was not a carpenter.

In Renato Kintanar’s book, he stated that Juan Gualverto, who married Maria Orilla, had four children, namely: Antonia, Narciso, Nicolas, and Jose. Further research done on the family has revealed that Juan Gualverto and Maria Orilla had nine children: ANTONIA, NARCISO, NICOLAS, JOSEFA, AGUEDA, MARIA, JOSE, JUANA, and FABIANA. It is also highly unlikely that Juan Gualverto was Argao’s first QUINTANAR as he was probably already dead before the end of the first quarter of the nineteenth century; most probably, it was either Narciso or Nicolas who chose the surname Quintanar for the rest of the family on November 21, 1849 when Governor General Narcisco Z. Claveria implemented the Renovacion del Apellidos, which mandated that all native Filipinos should adopt a Spanish surname in order to simplify censuses and taxation.

The surname QUINTANAR, according to Renato Y. Kintanar’s book, is a “Spanish word that means a post in the stable to which the horse-rope is tied.” However, the Real Academia de la Historia in Madrid has indicated that Quintanar is a habitational name from any of the places in Toledo, Burgos, Cuenca, Soria, and Logroño in Spain called Quintanar, from a derivative of Quintana which means “country house”. Quintana is a Spanish, Catalan, Asturian-Leonese, and Galician habitational name from any of the numerous places, large and small, named Quintana, which originally had something to do with “having a tax liability of one fifth of the annual produce.” Similarly, it may have been a variant of the French Quintaine, which is from an Old French term denoting “a post for jousting practice, hence a nickname for one who was skilled at this.”

It is highly likely that the family was descended from one of the ruling families in Argao prior to Spanish conquest. Clearly, the barangays that were under the control of the Quintanars, barangays number 10 and 17 were inherited from father to son. The earliest political personage in the family was Don Nicolas Quintanar, who served as cabeza of barangay number 17 from the late 1840s up to 1870. His nephew, Don Roman Quintanar, later succeeded him as head of barangay 17. Don Roman later served as gobernadorcillo of Argao for two terms, from 1882 to 1884 and 1890 to 1892. From existing archival records, it would seem that the Spanish authorities, especially the priests of Argao, were not in good terms with Don Roman due to his pro-indio sympathies. However, despite this, he went on to serve his two terms.

The Quintanars continued to rise in prominence in Argao especially with the coming of the Americans. Even before Agustin Kintanar’s meteoric rise to national prominence, Teodorico Kintanar was already a rising star in Argao. He was one of the first five Argawanons sponsored by the Americans to study abroad. He finished his medical degree from the University of Nebraska in April of 1921, becoming Argao’s second doctor (the first, Dr. Manuel Lucero, graduated in March 1921). Throughout the years, the family has grown in number and has continued to produce men and women who have served in the various fields of Argao: Monsignors Osbaldo and Francisco M. Padilla , for example, are Papal Nuncios. The current mayor of Argao, Edsel Amatong Galeos, is a 7th generation Kintanar descendant, coming from Maria Quintanar Daub.


Kintanar Family Name Distribution in Argao (as of 2011) 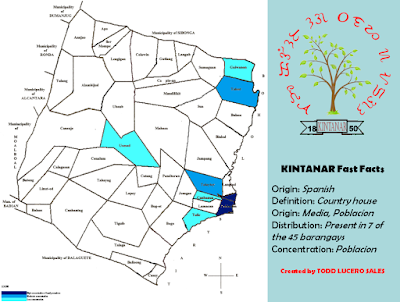