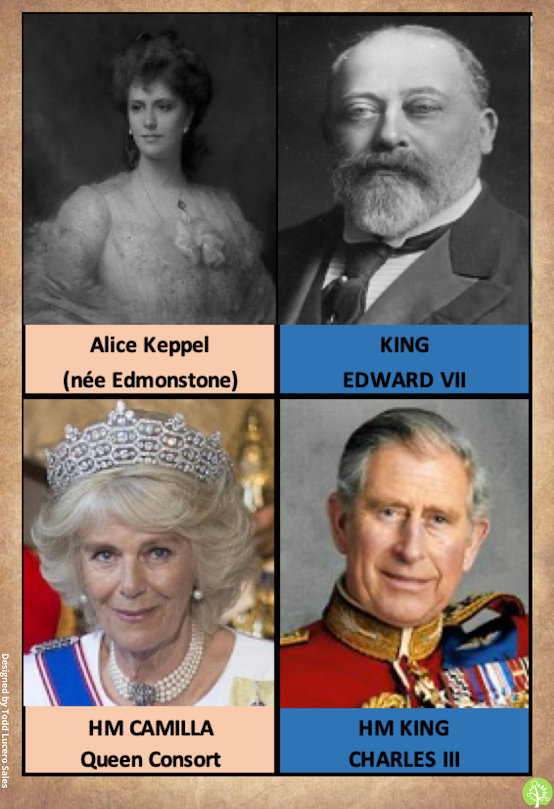 Whatever the truth about that first encounter, the genealogical connection between the two was well-established. It was indeed common knowledge within the royal family and the circle they circulated with that Camilla's great-grandmother, Alice Keppel (nee Edmonstone) met then-Prince Edward (later King Edward VII) in 1898 and became his mistress. While King Edward had a playboy reputation, Alice Keppel was unique in her position as the King's mistress because most people not only tolerated their affair but even approved of it. People said that the King, who had a temper, was a much better person when he started seeing Alice Keppel as she was the only one who could calm him down. Alice's husband, the Hon. George Keppel, would discreetly be out of the house whenever the king visited Alice at her home. Best of all, Queen Alexandra, wife of King Edward, was not only tolerant of but approved of Alice Keppel. In fact, she was with the Queen in 1910 when the King was on his deathbed. Some might not really understand the arrangement, but this was from a different era and when seen from the lens of that generation we know that such things were common and accepted.
Almost a hundred years later, Alice Keppel's great-granddaughter, Camilla Shand, later Camilla Parker-Bowles, would meet Prince Charles, the great-great-grandson of King Edward VII and pick up where their ancestors left off. While their relationship had many challenges along the way, and almost everyone disapproved of it, as soon as the impediments were gone and Charles was finally able to marry Camilla, things started to get better. Camilla was able to quickly adapt to royal life and, just like her ancestor, she never called attention to herself. She followed royal protocol and earned the respect of the Queen. Because of this, instead of the original agreement that she would not be called Queen consort when Charles would accede to the throne, the Queen in February this year made it officially known that she wished for Camilla to become Queen Consort, instead.
The new King and Queen were destined to meet, that much is clear if one looks at their family tree. And while their ancestors were not allowed to be together in an official capacity, they now fulfilled the relationship that their forebears were meant to have.
Once again, genealogy comes into play to explain something generations in the making.
Posted by Filipino Genealogist at 12:18 PM