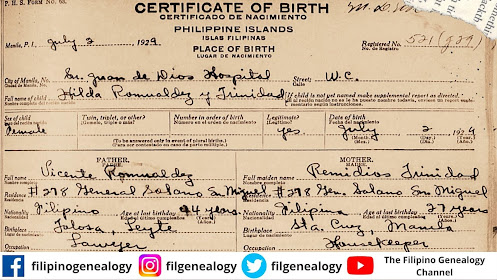 Genealogy Trivia: When she was first registered after her birth, the person who registered her name must have misheard and wrote down HILDA instead of IMELDA. Of course, she would soon be baptized as Imelda Remedios Visitacion Romualdez y Trinidad. Years later, she would become the First Lady of the Philippines and many years after that, would become the ONLY former First Lady to witness her own son's election and assumption to the Philippine Presidency.

Posted by Filipino Genealogist at 7:17 PM