Are You a Lakandula Descendant? 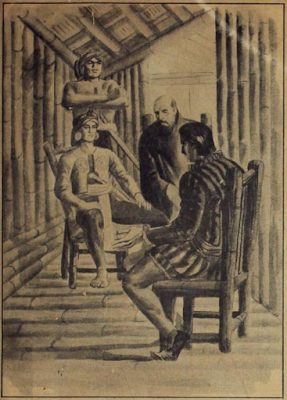 It has become a badge of pride for Cebuano and Bol-anon families to claim descent from Lapu-Lapu, Tupas, or any of the other Visayan rulers who fought the Spaniards. The same is true for those in Luzon whose pride it is to be known to be descendants of the pre-Hispanic noble and royal families of Central Luzon.

Because his descendants outnumber any other prominent pre-Hispanic family in Luzon and many of the names in his tree have become distinguished men and women in history (with some become infamous), descent from the pre-Hispanic royal families of Central Luzon has become almost synonymous to being a Lakandula descendant. Even the record keeping of the Spaniards lumped all royally-descended families into a file called Descendientes de Don Carlos Lacandola and when there was a need to put them all into one barangay in pueblos where descendants of pre-Hispanic royal families were found, this barangay was called the Gremio de Lacandolas.

It thus stands to reason that in many documents, a "Lakandula descendant" is not necessarily a direct descendant of the famous ruler of Tondo, but rather an indication of descent from the other royal personalities like Rajahs Matanda and Soliman or any of the names mentioned in the Rulers of Central Luzon family tree. In the same manner, while the title of this article is "Are You A Lakandula Descendant", the Lakandula descendant here will mean all other pre-Hispanic royalty descendants.

This article is simply an introduction to the 4 main qualifications for being a Lakandula descendant. Separate future articles will be released for each qualification.

Many families today claim a tenuous link to pre-Hispanic royalty just because of the surname they carry. This is the easiest way to claim descent from Lakandula, just because their surname is the same as one of the acknowledged "royal" or "noble" surnames.

So which surnames are these? First, we look at the most obvious list of surnames: the Claveria decree of 1849. The decree mentioned 4 very specific last names that should not be adopted by people without any business using these surnames: Lacandola, Mojica, Tupas, and Rajah Matanda. The reason given for the special protection for these surnames is, as the decree stated, to "avoid confusion which might result to the prejudice of those who with their surnames inherited from His Majesty certain benefits".


Lacandola and Rajah Matanda of course refer to our kings of Tondo and Manila. Mojica, on the other hand, refers to the "patrician house of Don Pedro de Mojica (also spelled Moxica) of Silang, Cavite. In 1677, Don Pedro and "his wife, children and descendants" were exempted by the Spanish crown from "tributes, forced labor (polo) and personal services of the general and particular kind.” To be sure, besides the descendants of Lakan Dula, the Mojicas of Cavite were the only indio clan which was able to maintain and preserve its special prerogatives till the end of the Spanish era. In fact, its vested rights surpassed those of the Lakandulas for they applied to both the male and female lines of descent whereas those of the Lakandulas were limited to the male line. Not even the proud progenies of Rajahs Matanda, Soliman, and Tupas were able to keep up a similar entitlement (Santiago, 1992).”

It is thus a safe assumption that people who carry the surname Lacandola, Raja Matanda (or simply Matanda), and let us add Soliman, are most likely descendants of the Lacandolas. Most likely, but it cannot be definitive for several reasons, chief among these is the fact that while these were "protected surnames" the compilers of the catalogo alfabetico de apellidos or the alphabetical catalog of last names still included these supposed protected surnames. The surnames Lacandola, Mojica, and Tupas are found on pages 71, 87, and 132 of the Catalogo, respectively, while Matanda appears to be not found in the catalog. 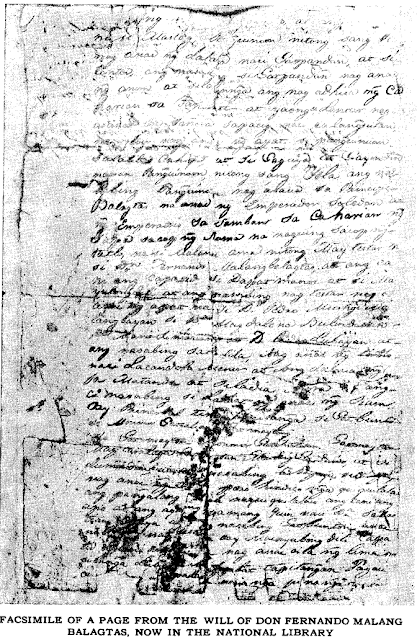 The next list of Lacandola surnames comes from the disputed will of Fernando Malang Balagtas. These are: GATBONTON, MONMON, GATCHALIAN, GATMAITAN, MACARALAGA, GATMAITIM, MANDIC, GATDULA, and DUMANDAN. Kapampangan historian Mariano Henson further said that “Kapampangans and Tagalogs with the surnames MUSNGI, DUMANDAN, LUMANLAN, MADLANGBAYAN, SALALILA, GATBONTON, GATMAITAN, GATDULA, CAPULONG, SOLIMAN, LAKANDULA, and MACAPAGAL  are descendants of Pansonum, who was christened Francisco Malang Balagtas and a direct descendant of the Madjapahit rulers of Luzon (Henson, 1955).

Two other surnames, TALANGPAZ and PAMINTUAN, are also considered ancient and most enduring Tagalog surnames and are believed to be descendants of pre-Hispanic Central Luzon roaylty (Santiago, 1989).

It is the belief of many that these names or portions of these names in modern Filipino surnames are true indication of descent from ancient Filipino blue-bloods. Unfortunately, just like Lacandola, Soliman, Tupas, and Matanda, carrying any one of these names isn't an immediate proof of being a descendant of Filipino nobility. The Claveria catalogo shows that these surnames were also found in the list: Macapagal (page 79), Magat (page 80), Salamat and Salonga (page 115), Dula (page 41), and the "Gat" names all found in page 54 of the Catalogo. As such, having Dula or Gatdula or Macapagal as a last name does not mean these people's ancestors did not simply pluck these names from the Catalogo. Mere stories of descent cannot prove validity of the claim.

The second list of names who are most likely descended from the Lacandolas are those whose names appear in the Gremio or Barangay de Lacandolas. The so-called gremio de Lacandolas was an administrative grouping of proven Lakandula descendants to simplify the administration of the Spaniards of the privileges received by the Lakandulas. This was established after 1758 when the Audiencia declared that only the descendants of Maestre de Campo Don Juan Macapagal and his brothers were to enjoy the benefits of the privilege given to their ancestors. 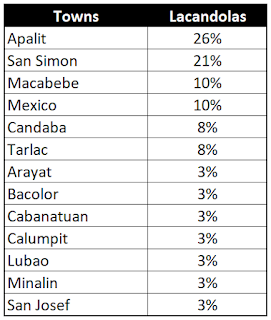 Other than the gremio or barangay de Lacandolas, we can also find other sources of Lakandula's descendants through the various lists of reservados in towns in Central Luzon. The Reservados was an accounting of individuals in every pueblo who were exempted from doing polo y servicio and from paying tribute. In most towns these were normally three: reservados por edad (exempted due to old age), reservados por enfermedad (exempted due to infirmity), and reservados por privilegio (exempted due to privilege, usually because the individual was a local functionary and their wife). In other towns, there were also exemptions given to primogenito or the eldest sons of cabezas de barangay; to mestizos espanioles; to church workers like cantors, sacristanes, and porteros; and soldiers, retired soldiers, and their spouses. But for a few towns in Central Luzon, they also an additional reservado called reservados por Lacandolas or reservados por merced de Lacandolas. On a rough estimate using existing records on these exempted individuals, it can be seen from the chart on the left that a bulk of the descendants of Lakandula could be found in the pueblos of Apalit and San Simon, both in Pampanga. There were also a few found in Macabebe and Mexico and a smattering few in other towns, most in Pampanga but also in others outside the province of Pampanga like Tarlac, Calumpit, and Cabanatuan. Many of the names found here like BUNDOC, TIGLAO, PUYAT, VERGARA, PAGUIO, DANGCA, PANIMOG, GALCINA, CAPULONG, YUMUL, YUMBA, LACANDOLA, BINUYA, BAYANI, MANALO, NOCOM, MANANGQUIL, BACANI, PINILI, LAPIRA, ANINAGAN, PAYQUITAN, DE QUIROS, BALAGTAS, DE LEON, LOZANO, DE TORRES, PANGAN, MACAPAGAL, MALDONADO, MANGUNAY, TUMOL, GUEVARRA,MUTYA, BATAC, CORTES, LOBO, CUYUGAN, SOLITAN, PUNSALANG, and RUEDA.

The last way to find out if one's family is a Lacandola descendant is through consultation of other archival document other than those mentioned above. One very sure way is going through the Descendientes de Don Carlos Lacandola which is a treasure-trove of Lakandula descendants.

The last document, which translates as Record of Case Filed Against the Heirs of Lacandola, show a sprinkling of names of Lacandolas from various towns in Bulacan: 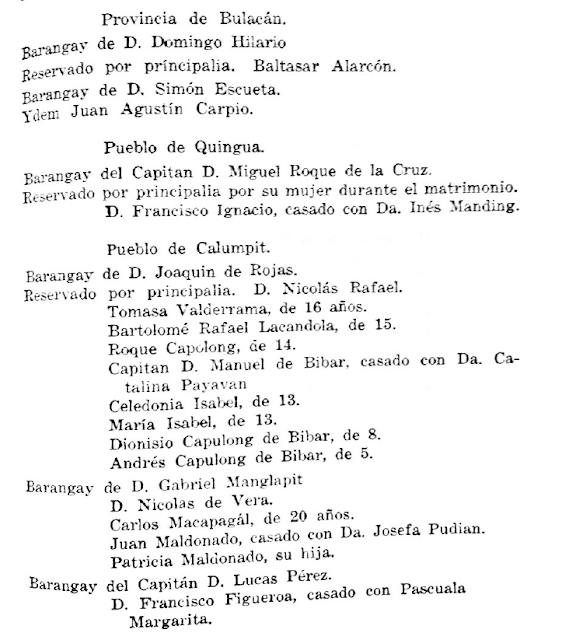 It is not enough that one finds one's last name listed among those mentioned above. For all you know, your Salonga or Lacandula surname was adopted only in 1849 in accordance with Claveria's decree. So the first thing one must do is to establish the origin of one's "Lakandula" family name. Roots to Pampanga, Bulacan, and nearby Central Luzon towns would give someone an 80-90% chances of being a Lakandula descendant.

But the most important step to take is to stitch everything together by making sure that one's possible Lakandula descent can be traced to any of the names mentioned in the gremio de Lacandolas or reservados por Lacandolas list. Only when one can trace one's family to these individuals using church and state records can one truly say that one is a Lakandula descendant.

The journey to discovering if one is a Lakandula descendant will be long and difficult, but it would be a great feeling when one is able to do so.

Posted by Filipino Genealogist at 12:00 AM