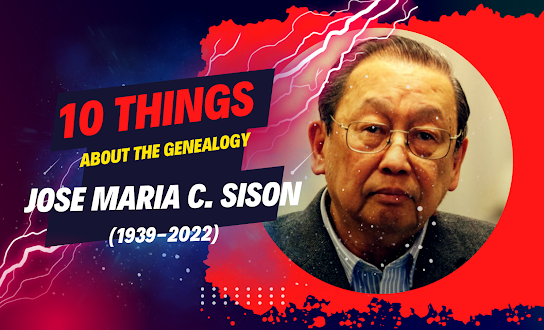 Jose Maria Canlas Sison, founder of the Communist Party of the Philippines, passed away in the Netherlands on December 16, 2022. So today, let us look at his genealogy. He was born to a wealthy family in Cabugao, Ilocos Sur, on February 8, 1939, the son of Salustiano Serrano Sison and Florentina Canlas. Let us explore his genealogy further to see just how well-connected he was.

NUMBER 1: The Sison family is not originally from Cabugao, Ilocos Sur.

While the family of Jose Maria Sison for the last few generations have always called Cabugao, Ilocos Sur as their family home, they were originally from Lingayen, Pangasinan. They only started living there in the mid-1800s when Julian Sison married Bonifacia Sevilleja Suller in 1860 in Cabugao. Before that they were from Vigan, Ilocos Sur, and before Vigan the Sisons lived in Lingayen, Pangasinan.

NUMBER 2: The Sisons are descended from a 16th-century Fukienese ship captain in the merchant fleet of Lin Tao-k’ien named SY SON.

Similar to many Chinese mestizo families, their ancestor, who was said to be a ship captain in the merchant fleet of Lin Tao-k’ien named SY SON who came from Fujian, settled in Lingayen where he quickly assimilated with the local population. By the third generation, the Sisons of Lingayen were already racially classified as mestizos sangleyes or Chinese mestizos and made a living out of being itinerant merchants.

NUMBER 3: His maternal great-grandfather Don Leandro Serrano was the biggest landlord in northern Luzon at the end of the 19th century. Leandro Serrano was the illegitimate child of Don Modesto Solosa y Solla, whose father was also a gobernadorcillo of Cabugao, and Dominga Serrano. A bulk of the Serrano’s wealth came from the Solosa family when Leandro’s grandmother, Dona Maria Solla viuda de Solosa, named him her legal heir and left most of her properties to him. He was also gobernadorcillo of Cabugao for a long time and built the largest mansion in the province. It had 25 rooms, was said to have a total floor space of 5,000 square meters, a chapel, and a four-level storehouse that was considered to be the biggest in the province.

Don Leandro Serrano would later marry Ursula Azcueta and one of their children, Martiniana Serrano, was JOMA's paternal grandmother. 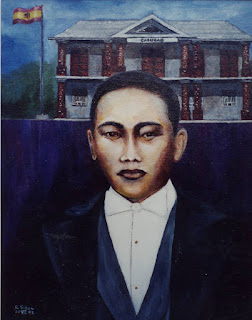 Don Gorgonio Sison y Soller was the first generation of the Sison family to have been born in Cabugao, Ilocos Sur. He gave clandestine support to the Filipino guerrillas fighting against the invading Americans while presenting a cordial face to the enemy. He was the last to hold the position of capitan municipal of Cabugao during the Spanish period and then became the first to be elected municipal president during the American period.

He and his wife Martiniana Serrano were the parents of Salustiano Sison, father of JOMA Sison. 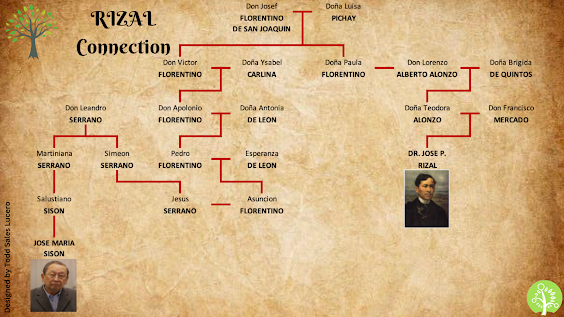 Though not relatives by blood, a first cousin of JOMA Sison’s father, Jesus Serrano, married into the Florentino family of Vigan, Ilocos Sur. Due to this union, JOMA Sison’s family is then related to the descendants of Jose Alberto y Florentino, the older half-brother of Teodora Alonzo, who was the mother of national hero Jose Rizal who was the son of Lorenzo Alberto Alonzo and Paula Florentino.

NUMBER 6: His father’s cousin Teofilo Sison was a governor of Pangasinan.

Teofilo Sison served as a governor of Pangasinan and was later appointed as the first Defense Secretary during the Commonwealth period. He was convicted in 1946 for allegedly collaborating with the Japanese occupation forces but was given amnesty in 1947.

Ever since Senator Leila de Lima’s incarceration, many have speculated how she and JOMA Sison’s wife Julieta de Lima were related. While some have erroneously concluded that they are sisters, and even some reputable researchers have quickly made her a sister of Senator Leila’s father, the truth is they are distantly related. Senator de Lima herself as late as 2020 stated that they are not cousins, but distant relatives. In another earlier interview, she mentioned that Julieta de Lima was at least third cousin with her father Vicente. In that case, Senator de Lima’s paternal ancestor, Juan de Lima, was the brother of Julieta’s great-grandfather, Pedro de Lima. 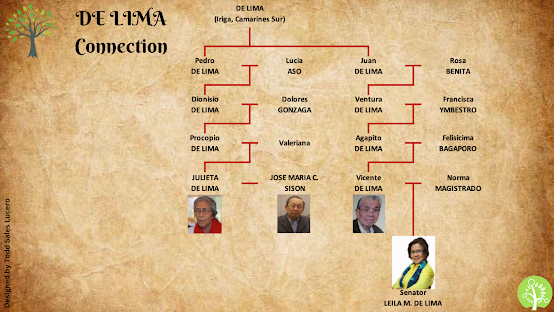 NUMBER 8: His family is related to President Fidel Valdez Ramos.

Joma Sison’s grand-uncle, Enrique Serrano, married Maximina Valdez. Because of this marriage, JOMA Sison is thus also related to the Valdezes of Pangasinan, whose most illustrious member is the late former President Fidel Valdez Ramos.

NUMBER 9: He had four children with his wife Julieta de Lima.

Although very rarely mentioned, the Sison family trees online and some other rare references to JOMA Sison and his family mention the names of the children of Jose Maria Sison and his wife Julieta de Lima. These are JANAH BARBARA, JANOS LEO, JEMMIMA, and JASM. 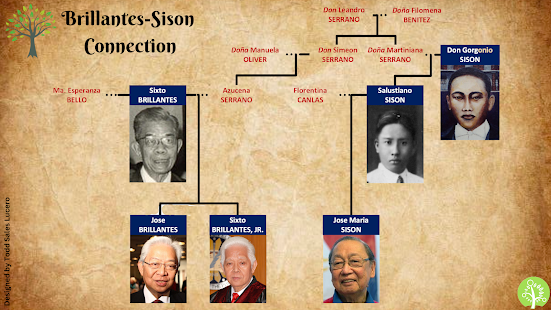 While it is not hidden knowledge, many still are unaware that the former Commission on Elections Chairperson Sixto Brillantes, Jr. was the second cousin of Jose Maria Sison. They shared a common descent from Don Leandro Serrano, whose daughter Martianiana Serrano was JOMA’s grandmother while her brother, Simeon Serrano, was Sixto’s grandfather.

1. Church records of Cabugao and Vigan, Ilocos Sur 2. The Alonzo - Rizal family tree 3. https://josemariasison.org/ primarily the following articles: (1) My Ancestors in the Revolution (2) Sisons in Politics and Government (3) Kinship and Encounters with FVR (4) Sison Family of the Philippines 4. Dispatch from Crame No. 1,000 (https://legacy.senate.gov.ph/press_release/2020/1218_delima2.asp) 5. De Lima: So what if I'm Joma's kin? (https://news.abs-cbn.com/nation/07/30/09/de-lima-so-what-if-im-jomas-kin) 6. The Rizalian Trees: Lineages of Jose Rizal and His Love Interests

Photos except for the family trees are from the josemariasison.org website.

Posted by Filipino Genealogist at 1:02 PM