Cebuano Governors and their Connections

Based on the 2018 financial report of the Commission on Audit (COA) covering all 81 provinces in the Philippines, Cebu has once again been named the richest province in the country, with over PhP35 million worth of total assets. This recent accolade for the province, coupled with the recent research I have done on the Hispanic ancestry of Governor Gwen Garcia, has led me to once more take on the challenge of connecting all Governors of Cebu.

Counting from the time of US colonization, Cebu has already had 27 governors, although two of these, Governor Osmundo Rama and Governor Gwendolyn Fiel Garcia, have served twice, so technically there just have been 25 unique governors in Cebu.

While some local historians have insisted that General Arcadio Maxilom and / or Luis Flores are considered as the first governors of the province, the provincial government itself and most Cebu academics have yet to agree with this. Until such time that we accept this notion, Don Julio A. Llorente remains the official first governor of Cebu.

This write-up bears the same goal as that of RP Politics: Still A Family Affair, where I successfully connected all Philippine Presidents and other political and social personalities. So, like a microcosm of Philippine society, the genealogies of Cebu’s governors reflect the amalgamation of races that is descriptive of the Filipino genetic makeup. Majority of the province’s governors are mainstream Filipinos. That is, they are those whose ancestors are described as indios in Spanish-era records. But there are a few with other racial classification.

While all governors of the province have at least 3 generations of genealogy available, not all have extensive family histories available for now. Among the more recent governors, Hilario P. Davide III can trace his family tree seven generations up, while Pablo and Gwendolyn Garcia's Spanish lineage goes back 11 and 12 generations, respectively, to Ciudad Real, Spain. Her earliest traceable ancestor, Francisco Garcia, lived sometime in the 1550s. Some, like Hilario Abellana, can be traced only to his parents.

An interesting aspect of Cebuano politics is the inter-relatedness of several governors. We have the father-daughter tandem of Pablo and Gwendolyn Garcia and the father and son tandem of Mariano Jesus Cuenco and Manuel A. Cuenco. Then we have the uncle-nephew Juan and Arsenio Climaco. There is also the father-son / grandfather - grandson situation of and Sergio Osmeña Sr. and Jr. and Sergio Sr.'s grandson Emilio "Lito" Osmeña, Jr. 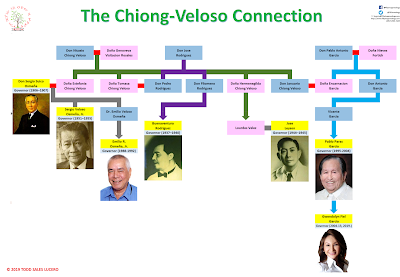 Aside from these blood relationships, there are also other connections among the governors of Cebu.  There are at least 2 major gateway families in the genealogies of the governors of Cebu; that is, families that allow us to connect various lines to one another. The first is the Chiong-Veloso family, to which many governors can be connected. One of the daughters of Don Nicasio Chiong Veloso, Estefania, married Governor (and later President) Don Sergio Suico Osmeña. Their son was Governor (and later Senator) Sergio Osmeña, Jr. and their grandson was Governor Emilio "Lito" Osmeña, Jr. A sister of Estefania, Tomasa, married Senator Pedro Rodriguez whose nephew was Governor Buenaventura Rodriguez. Another sibling of Estefania was Januario Chiong Veloso. He went on to marry Encarnacion Garcia whose brother, Antonio, is the grandfather and great-grandfather of Governor Pablo Garcia and Governor Gwendolyn F. Garcia, respectively. One other daughter of Nicasio, Hermenegilda, was the mother of Lourdes Velez, wife of Governor Jose Leyson. 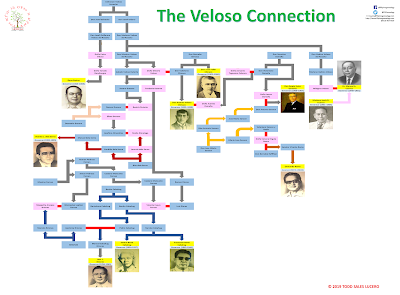 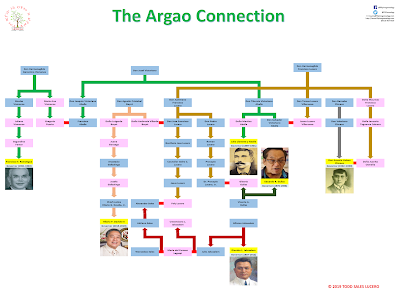 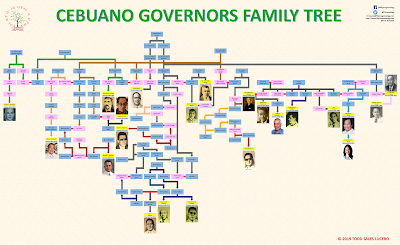 For now, I have only connected 22 of Cebu's 25 Governors. Perhaps there are researchers who can help expand this tree to include Governors Jose Delgado, Hilario Abellana, and Manuel Roa.

Posted by Filipino Genealogist at 7:19 AM