The Manalos: A House Divided


UPDATED July 25, 2015. It has been a few days since the news broke out about the expulsion of Cristina Villanueva Manalo, widow of the late Ka Erdy Manalo of the influential Iglesia ni Cristo, and three of her children from their church. This is but another episode in the complex Ysagun-Manalo family that started with the birth of the INC's founder, Felix Manalo Ysagun, whose history is discussed below.

In August of last year I met up with a fellow genealogist and a friend, Felvir Ordinario, when I was at the Family History Center of the LDS Temple in White Plains to continue my research on several prominent Filipinos. When we had the time, we discussed and wondered why the above-mentioned three founders of Filipino Christian churches have never had their genealogies explored before. Later I discovered an article by Joseph J. Kavanagh online which discussed, albeit not comprehensively, the early life and family of Felix Manalo. Another online article from Philippine Studies by Pedro S. De Achutegui and Miguel A. Bernad also gave a brief discussion on Gregorio Aglipay’s family. Although my goal today in writing this was to do the genealogies of the three in one article, seeing as there were only two full studies done on Manalo and Aglipay so far, and none for Quiboloy, this article would just be the first in  a series of articles on these religious leaders.

A post by my friend Felvir explored the immediate family of Felix Y. Manalo, His article made superb use of archival documents to shed light on Manalo's parents and grandparents. In the end, because of several years' worth of lacking documents from the Taguig collection, he was only able to definitively establish the names of Felix's maternal grandparents though he was able to make some excellent deductions with regard to the father of Felix Manalo. 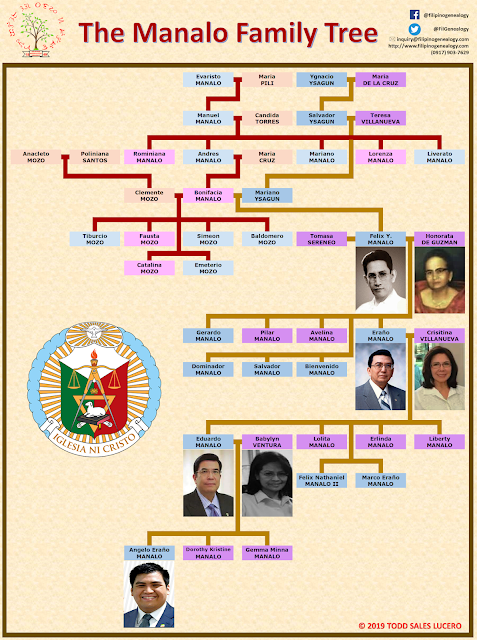 After going through several centuries' worth of baptismal and matrimonial records as well as the existing padron records in Taguig, I came to the sad conclusion that because of the scarcity of records, or rather the holes in the available church records of Taguig, there is really no definite way to establish Felix Manalo's genealogy. But, here are some deductions on my part:

Felix Ysagun Manalo was actually legally Felix Manalo Ysagun, the son of Mariano Ysagun and Bonifacia Manalo. My friend Felvir Ordinario's article on Felix Manalo concluded that Felix's grandfather's name was Salvador Ysagun. In the record that this is based on, Salvador's wife and presumably Felix's grandmother was Teresa Villanueva. However, going through earlier records I found only 1 Salvador Ysagun who was born around 1805-1809. He married a Dolores Manalo in 1829 thus it would seem unlikely that Mariano Ysagun, Felix's father, was the son of this couple. However, it is possible that this same Salvador remarried sometime in the 1840s and then later had Mariano. If this were the case then we can extend Felix Manalo's family just one generation more: his great-grandparents were Ygnacio Ysagun and Maria de la Cruz;

This same couple, Ygnacio Ysagun and Maria de la Cruz, further brings an interesting tidbit to Manalo's genealogy. The Ysagun family in Salvador Ysagun's marriage record was described as morenos.  In the unique Spanish socio-racial classification system, a moreno was a dark-skinned mixed race, usually a 2nd generation descendant of a black person and an indio.  So if Ygnacio Ysagun was 1/4 African, that would make Felix Ysagun Manalo, his great-grandson, 1/32 African;

Here is where another interesting thing comes to our notice. Manuel Manalo was described as a moreno in his son Andres's baptismal record. However, Manuel's father, Evaristo, is described as a criollo, a term to describe Spaniards born in the Philippines.

What is clear with what little information we have on the genealogy of Felix Y. Manalo is that both his paternal and maternal sides have been living in Taguig since at least 1782. Another clear conclusion we can come up with is that the earliest Manalo and Ysagun generations were of Hispanic descent. Of 17 identified as morenos, mestizos, and criollos, 15 were Manalos while only 2 were Ysaguns. The two Ysagun men, Antonino and Ygnacio Ysagun, were both described morenos. The 15 Manalo men can be divided into 4 criollos, 1 mestizo, and 10 morenos. Interestingly, these racial classifications only appeared from 1782 to 1838 records. After that everyone was either mestizo or indio.

Another interesting aspect of the family of Felix Y. Manalo was the fact that though his parents were consistently described as poor, many of his maternal relatives were local functionaries. 10 of the Manalo men were listed as cabezas de barangay while 4 Manalo women were wives of other cabezas. One of these was Bonifacia Manalo, who remarried to Don Clemente Mozo.

Finally, one last observation on the Manalo/Ysagun family tree. Before the 1885 marriage of Mariano Ysagun and Bonifacia Manalo, there were at least 2 earlier unions between these 2 families. In the 1790s we see the baptismal record of Maria Manalo, daughter of Policarpio Manalo and Agustina Ysagun. In 1829 Salvador Ysagun (incidentally the grandfather of Felix Manalo), married his first wife, Dolores Manalo.


It is unfortunate that though the records of Taguig, Metro Manila, go back as far as the late 1600s, there are several decades missing from these thus making it impossible for us to get a clearer picture of the genealogy of Felix Y. Manalo, the man considered by his followers as "the Last Messenger of God". Still, with more research done, we should be able to expand this family tree further. (To be continued...)