The Padrones and the Rama Family


Every year I always seem to forget to celebrate the birth of my beloved city - Cebu City. Although Cebu City has been a bustling metropolitan since the time of the Spaniards it only became a city on February 24, 1937 through the efforts of Don Vicente Rama, who authored Act No. 58, creating Cebu City as a Chartered City and which was approved on October 20, 1936. This contribution to the history of Cebu earned him the title “The Father of Cebu City”.

The Rama family in Cebu has always been one of the more important families in the city, mainly because the children and grandchildren of Don Vicente Rama have continued to serve the Cebuanos (and branching out in other towns) in various political posts. Vicente Rama was born in Cebu City on June 6, 1887. Like his contemporary President Sergio Osmeña he was a child outside of wedlock. His father was Gabriel Raffiñan, whose belonged to a "highly respected family" from Cebu City. His mother, Engelberta Rama, was from a family in Naga, Cebu. Much of his known genealogy may be read through a 2009 Cebu Daily News article. The news article states that Engelberta's parents were Laurente Rama and Juana Enguio from Naga. Don Vicente married Catalina Genson and they had 13 children. These include former Cebu governor Osmundo Rama, whose own son was former vice governor Enric Rama; former Councilor Fernando Rama whose own son Eduardo was a governor and congressman in Agusan Del Norte (Eduardo's own son, Edu, also served as Cebu City councilor); the late Councilor Clemente Rama; Napoleon Rama, who was a former Manila Bulletin publisher and a delegate to the 1972 Constitutional Convention; Jesus Rama, who died with President Ramon Magsaysay in Mt. Manunggal; and the late Capt. Laurente Rama, father of barangay captain George Rama and Annabelle Rama, who herself is married to actor Eddie Gutierrez and the mother of beauty titlist and actress Ruffa Gutierrez and actors Raymond and Richard Gutierrez. Since Naga, Cebu is one of the few towns in the Philippines with preserved padrones in its church archives I thought that the Rama family would be an interesting family to trace with the use of the padrones. 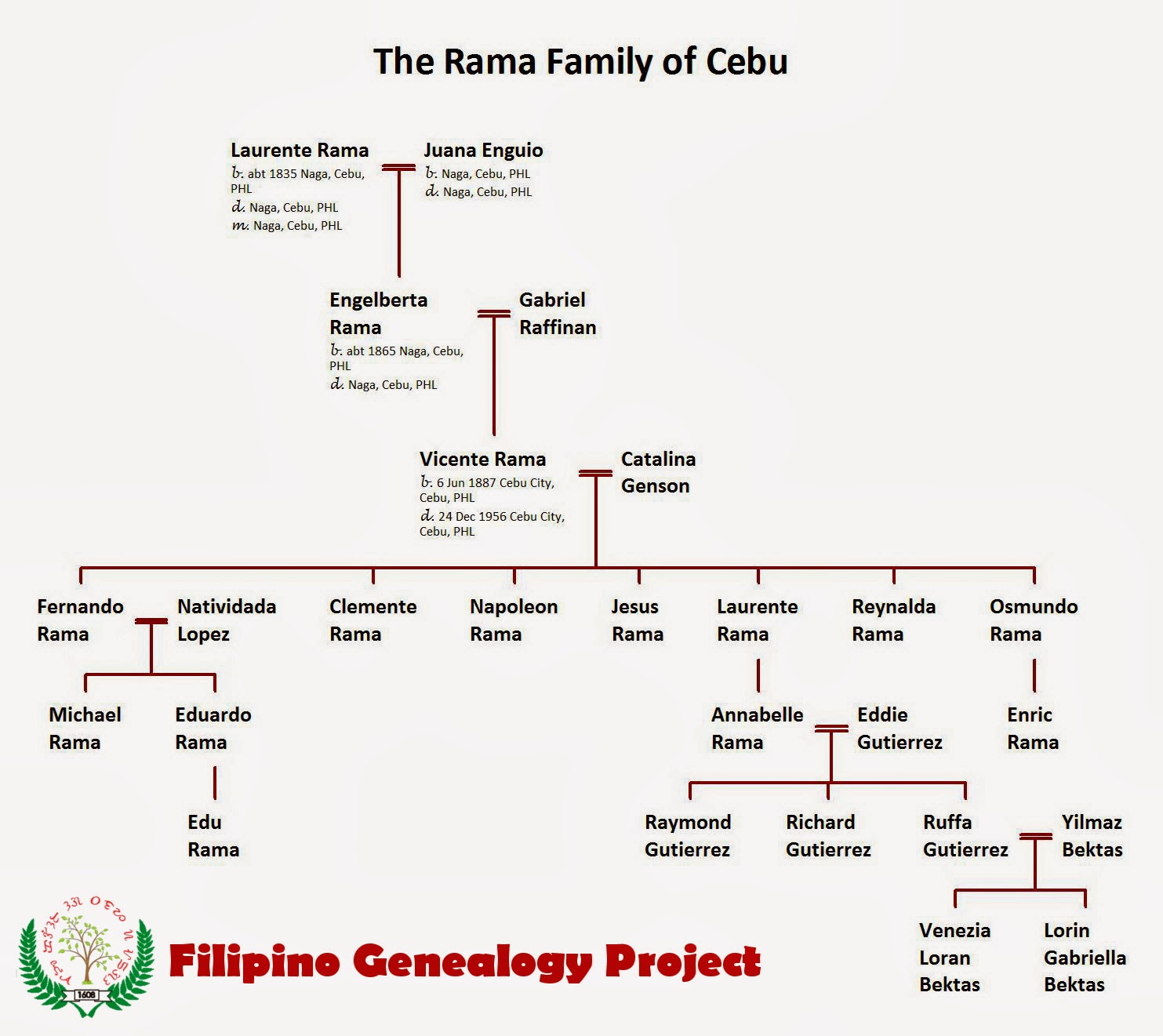 Until the nineteenth century, there seemed to be no colony wide accounting procedures imposed for maintaining tribute records. Generally, collection came to be based on lists (padrones o padrones tributarios) of eligible tribute payers that were maintained by the cabezas de barangay. Governors-general starting in 1799 formalized through a series of directives the accounting of the inhabitants of the colony. The padrón then was either a membership list of a parish or a register of inhabitants, who pay taxes, in a place.

Thus, for the genealogist, the padron is indeed a very important document to come by. Not only does it contain the general residential area of your ancestor, it lists all the members of a household (head of family and spouse and children and other dependents) and if your ancestors lived in a barangay with a very meticulous cabeza, you also get to see all the birthdays of your relatives.

While all towns in the Philippines had this record at some point in time, it would appear that not all the towns followed the directives of the authorities strictly and even if some did many of the records have been lost throughout the centuries. Based on FamilySearch's catalog of available records only the provinces below, with the corresponding number of towns, have available padrones in their archives:
Of course, it does not necessarily mean that all the towns with padrones have complete data. Some have intermittent records ranging a few years to a few decades while others have just one or two years' worth of information. Of the 48 towns and cities with available padrones one stands above the rest as having an almost complete and uninterrupted padrones. The Nagcarlan, Laguna parish archive offers of data a set for analysis that is unique the Philippines. An American researcher conducted an inventory of some 600 local church archives of the 1,000 or so that existed in the Philippine colony in 1900 and none of the local archives thus far matches that of Nagcarlan. Indeed, the documentary record for Nagcarlan might have been even more remarkable had the parish church of San Bartolome not been destroyed by fire in 1781. It has an almost complete padron from 1803 to 1815 and then from 1827 to 1890. This means families from Nagcarlan can be guaranteed of at the very least 5 generations' worth of family trees, and even more if they use the other church records that are available that go back to as far as 1792.


I tried to reconstruct Vicente Rama's genealogy using the padron de almas of Naga in Cebu but I was unable to find any Rama in the padrones available. The only connection I was able to make was to connect his grandmother, Juana Enguio, to her parents, Roman Enguio and Teodora Mangila. Only this family appears in the padron, which led me to conclude that like the Rama family, the Enguio appears not be of Naga origin but somewhere else. Further research into the Rama family is needed to establish the origins of the family. Juana Enguio, meanwhile, was the youngest sister of Romana, Crispulo, Juan, Vicente, Januaria, Benita, and Narciso. The padron in Naga, Cebu, showed the birth years and the barangay number of the inhabitants. When the family knew it, they also showed the birth month and day of the people listed in the padron.

Just like all other church records from the Spanish period there are many variations in the contents of the padron. And, just like other records, not all towns have the padrones nor do these towns even have complete padrones. But for those whose ancestors come from any of the 48 towns with available padrones, their search for their ancestors would greatly be helped by these records. Just like in any genealogical endeavor, a certain amount of luck is always involved.