For the very lucky few, the journey to one's genealogical past may be discovered with just one book.

Books have been produced throughout the centuries to chronicle the lives of families famous, infamous, or even the ordinary. Some bygone member or members of families were smart enough to research and preserve their genealogies for a variety of reasons. Whatever their purpose, those who descend from these families are lucky because the bulk of the research has already been done for them.

In the Philippines, however, this isn't as common. For one thing the subject of genealogy is not as popular among the population and the concept of writing a book about a family is not also a common practice. But again, for those lucky enough to have relatives who have done the research then searching secondhand bookshops, public libraries, and online bookstores and other sources is worth it.

Today, in celebration of Jose Rizal's birth, I decided to show how his genealogy was discussed thoroughly by just one book.  Although Rizal's family tree is a fascination of many researchers and history buffs, and books like Lolo José: An Intimate and Illustrated Portrait of José Rizal (written by Asuncion Lopez Bantug, a grandniece of Jose Rizal), Rizal without the Overcoat (by Ambeth Ocampo), and José Rizal: Life, Works, and Writings (by Gregorio Zaide) have extensive discussions about Rizal's family history, no one has written a more comprehensive genealogy of the National Hero than Austin Craig's Lineage, Life and Labors of Jose Rizal, Philippine Patriot: A Study of the Growth of Free Ideas in the Trans Pacific American Territory. 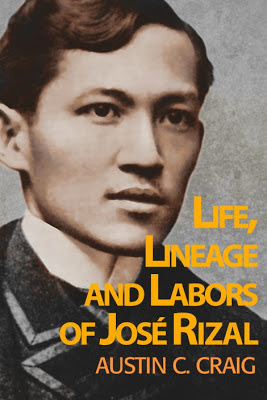 His book begins with Rizal's Chinese ancestor, Domingo Lam-co, whom he described in the book as a sort of leader among the various Chinese migrants who left their country for a better life in the colony. He was said to have had a certain prestige among his own people (from Chinchew) as shown by his leadership of those who later settled with him in Biñan, Laguna, as well as the fact that he acted as godfather, which suggests that he was above the ordinary standing. Craig wrote that this prestige was because of his marriage to the daughter of an educated Chinese, an alliance that was not likely to have been made unless he was a person of some education, and education is the Chinese test of social degree. Lam-co was baptized in the Parian church of San Gabriel on a Sunday in June of 1697, hence his name. His age was given in the record as thirty-five years, and the names of his parents were given as Siang-co and Zun-nio.

(Although some researches have given Lam-co's real name as Cue Yi-lam and have claimed that he belonged to the Cua clan of south China, being one of the descendants [a 19th generation descendant, in fact] of Shu Du, the 5th son of Zhou Wu Wang, the political genius who started the Chou dynasty, there is nomention of these facts in Craig's book.)

Domingo Lam-co married Inez de la Rosa whose father was Agustin Chinco, also of Chinchew, a rice merchant, who had been baptized five years earlier than Lam-co. His baptismal record suggests that he was an educated man. Agustin Chinco's parents were Chin-co and Zun-nio and he married Jacinta Rafaela, a Chinese mestiza of the Parian, who was the daughter of a Christian Chinese and a Chinese mestiza. Aside from Inez, Agustin Chinco's other children were Magdalena Vergara, Josepha, Cristoval de la Trinidad, Juan Batista, and Francisco Hong-Sun.

Domingo and Inez's only surviving child was named Francisco, and this son was the first to use the last name Mercado. He was already a grown man when his mother died. Domingo followed a few years later.

Francisco Mercado lived in the hacienda of St. John the Baptist at Calamba where there was a great dam and an extensive irrigation system which caused the land to rival in fertility the rich soil of Biñan. He only married on May 26, 1771, rather later in life than was customary in Biñan, though he was by no means as old as his father, Domingo, was when he married. His bride, Bernarda Monicha, was a Chinese mestiza of the neighboring hacienda of San Pedro Tunasan, who had been early orphaned and from childhood had lived in Biñan. They had two sons, Juan and Clemente. A well to do man, his name appears so often as godfather in the registers of baptisms and weddings that he must have been a good-natured, liberal and popular man. He died in 1801.

Francisco Mercado’s eldest son, Juan, built a fine house in the center of Biñan, where its pretentious stone foundations yet stand to attest how the home deserved the pride which the family took in it. At twenty-two Juan married a girl of Tubigan, who was two years his elder, Cirila Alejandra, daughter of Domingo Lam-co’s Chinese godson, Siong-co.

Juan later changed the status of his family in the tribute list from mestizo sangleyes (Mestizo Chinese) to indios. As Craig put it, Juan must have felt that four generations after Domingo Lam-co qualified them already as indio and not Chinese anymore. Juan's children were Gavino, Potenciana (who never married), Leoncio, Fausto, Barcelisa (who became the wife of Hermenegildo Austria), Gabriel, Julian, Gregorio Fernando, Casimiro, Francisco, Petrona (who married Gregorio Neri), Tomasa (later Mrs. F. de Guzman), and Cornelia, the belle of the family, who later lived in Batangas. Francisco was Rizal's father.

A year after his sister Potenciana’s death, Francisco Mercado married Teodora Alonzo, a native of Manila, who for several years had been residing with her mother at Kalamba. Though Craig found the paternal line easy to trace, he felt that Teodora Alonzo's was unfortunately not so easily traced.

Her father, Lorenzo Alberto Alonzo (born 1790, died 1854), was said to have been “very Chinese” in appearance. He had a brother who was a priest, and a sister, Isabel, who was quite wealthy; he himself was also well to do. Their mother, Maria Florentina (born 1771, died 1817), was, on her mother’s side, of the famous Florentina family of Chinese mestizos originating in Baliwag, Bulacan, and her father was Captain Mariano Alejandro of Biñan.

Lorenzo Alberto was municipal captain of Biñan in 1824, as had been his father, Captain Cipriano Alonzo (died 1805), in 1797. The grandfather, Captain Gregorio Alonzo (died 1794), was a native of Quiotan barrio, and twice, in 1763 and again in 1768, at the head of the mestizos’ organization of the Santa Cruz district in Manila.

Lorenzo met Brigida de Quintos while he was a student in Manila, and that she, being unusually well educated for a girl of those days, helped him with his mathematics. Their acquaintance apparently arose through relationship, both being connected with the Reyes family, and soon they were married. They had five children: Narcisa (who married Santiago Muger), Teodora (Mrs. Francisco Rizal Mercado), Gregorio, Manuel and José. All were born in Manila, but lived in Kalamba, and they used the name Alonzo until in 1850 when, with their mother, they adopted the name Realonda in accordance with the Claveria decree. This latter name has been said to be an allusion to royal blood in the family, but other indications suggest that it might have been a careless mistake made in writing by Rosa Realonda, whose name sometimes appears written as Redonda. This is also similar to the common belief that the Rizals changed their last name Mercado to Rizal as they were farmers, that the surname Rizal came from the Spanish ricial, which means green fields. However, ricial does not seem to appear in the Catalogo Alfabetico de Apellidos but there is Risal, which is very likely the original surname but was made to look better -- hence Rizal.

Brigida de Quintos’s death record, in Kalamba (1856), speaks of her as the daughter of Manuel de Quintos and Regina Ochoa. The most obscure part of Rizal’s family tree is the Ochoa branch, the family of the maternal grandmother, for all the archives,—church, land and court,—disappeared. So the only sources for this line's history are the ones told by elderly people.

The first of the family is said to have been Policarpio Ochoa, an employee of the Spanish customs house whose son was Estanislao Manuel Ochoa, with the blood of old Castile mingling with Chinese and Tagalog in his veins. He was part owner of the Hacienda of San Francisco de Malabon and one story says that somewhere in this family was a Mariquita Ochoa, of such beauty that she was known in Cavite, where was her home, as the Sampaguita of the Parian.

There was supposedly a Spanish nobleman in Cavite in her time who was deported for political reasons and it was said that this particular noble was the Marquis de Canete.

To make a long story short, this nobleman fell in love with Mariquita but because of his political color he was not allowed to marry Mariquita. Thus, she became a common-law wife. One of their children, José, had a tobacco factory and a slipper factory in Meisic, Manila, and was the especial protector of his younger sister, Regina, who became the wife of attorney Manuel de Quintos. A sister of Regina was Diega de Castro, who with another sister, Luseria, sold chorizos and tiratira, the first at a store and the second in their own home, but both in Cavite, according to the variations of one narrative.

Manuel de Quintos was an attorney of Manila, graduated from Santo Tomás University, whose family were Chinese mestizos of Pangasinan. The lawyer’s father, of the same name, had been municipal captain of Lingayan, and an uncle was leader of the Chinese mestizos in a protest they had made against the arbitrariness of their provincial governor.

All the branches of Teodora Alonzo’s family were much richer than the relatives of her husband; there were numerous lawyers and priests among them—the old-time proof of social standing—and they were influential in the country.

Some historians, and this includes Austin Craig, have hinted that Jose Rizal was a Lakadula descendant through Teodora Alonzo, but as there has not been archival documentation for this then it remains nothing but a legend.

The book goes on to chronicle Rizal's life and death, but suffice it to say that this book is indeed the first of its kind to explore comprehensively Rizal's genealogy. Until today, it remains perhaps the most authoritative of the National Hero's family tree.

Imagine how easy our genealogical quest would have been if we all had someone like Austin Craig to have researched our family trees for us.