SANCHEZ, m.n., one of the most common Spanish surnames in the world. Spanish patronymic last name that means "son (or descendant) of Sancho". Spanish form of the Late Latin name Sanctius, which was derived from the word sanctus meaning "saintly, holy". Alternatively, Sancho and Sanctius may have been taken from the Basque name Santxo.

It is one of the original 700 plus last names in Argao adopted during the 1849 Claveria decree. The Sanchez family was also one of the 16 hereditary principalia families of the town during the Spanish period and produced at least 11 cabezas de barangay. It also had one municipal councilor during the American period. A full history of the SANCHEZ family is available. Please contact the genealogist if interested.

(1) Anastacio (SANCHEZ), born around the first quarter of the 1700s. He married Javilla Maria and they had one child, Agustin Patricio (Sanchez), who married Maria Sidlacan Algones. They had the following children:

(2) David Calisto (SANCHEZ), born in the middle of the 1700s. He is most likely a direct connection of #1 considering the similarities in the naming patterns of children. He married Cristina Hermosa and had one son, Agustin Patricio (Sanchez), born sometime in the last quarter of the eighteenth century.

(3) Crisanta Tomasa (SANCHEZ), born late 1790s or early 1800s. She married Miguel Ygnacio (ALGONES) and had the five children. She was most likely from the family of Anastacio Sanchez (see #1) and her husband was also a close relative of Maria Ynguila Sanchez's husband (see #1, letter C). Her descendants carry the last names ALGONES, PANERIO, QUINTANILLA, and DURAN.


SANCHEZ Family Name Distribution in Argao (as of 2011) 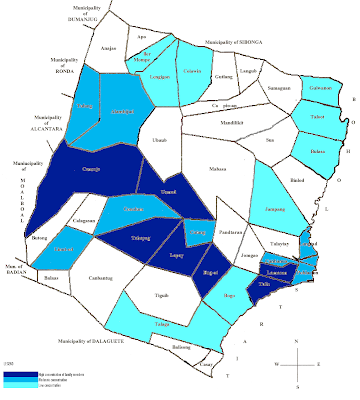 Posted by Filipino Genealogist at 3:12 PM