What If of History: President Ferdinand R. Tabuebue, Jr. 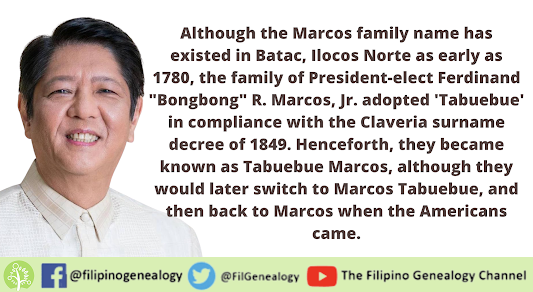 The Marcos family name has an interesting history. While many Filipino families have surnames that were adopted in accordance with the 1849 Claveria Surname decree, it is interesting that the Marcos family already used "Marcos" as their last name prior to Claveria, then adopted a new surname to comply with the decree, but later would officially register Marcos as their official name.

The Marcos family has roots to Batac, Ilocos Norte where the surname has been traced back to the last quarter of the 1700s. The earliest ancestor of President-elect Ferdinand R. Marcos, Jr. that we can definitively trace is his 3X-great-grandfather, Don Gregorio Marcos, who was born on March 11, 1893. Unfortunately, his baptismal record (see below) does not state who his parents were and in fact simply states that he was padres no conocido, or parents unknown. This, despite him being described as a legitimate child. So we can only assume either the record keeper mistakenly wrote legitimate child in the record, or the other way around when he forgot to write down the names of Gregorio's parents. Whatever the case, family lore suggests that Gregorio Marcos was an assistant to the Spanish provincial judge in Laoag in the mid-19th century. His wife was also a Marcos named Maria who, according to some oral tradition, was supposedly Itneg by racial classification who was impregnated by the same Spanish judge her husband worked for. It is a possibility that it was Gregorio who was most likely the product of a liaison between a Spanish judge and a local woman, possibly Itneg as the oral tradition suggests.

Whatever the case, at least two of the children of Gregorio and Maria Marcos were baptized under the "Marcos" family name. Damaso Marcos, born on December 8, 1830, would have been too young to have been the one to register their family name to comply with the Claveria surname decree in 1849. Therefore, it was definitely Gregorio Marcos who would have officially adopted their Claveria-surname.

Even though the family already had a surname that was allowed by the provisions of the decree, the next decades saw the family name being listed in Batac's official records as either "Tabuebue" or "Tabuebue Marcos". These tell us that the family adopted "Tabuebue" as their new surname. It does not appear to be part of the list of surnames that accompanied the decree. It is very possible that the family simply reverted to an old indigenous name that they might have carried way before they used "Marcos".

Damaso Marcos would later be listed as Damaso Tabuebue Marcos. His own son, President-elect Marcos Jr.'s great-grandfather, Don Fabian, would later officially revert the surnames to "Marcos Tabuebue" as seen in one official government gazette. Even the father of President Ferdinande Edralin Marcos, Mariano Marcos, was officially registered as Mariano Tabuebue when he was born on April 21, 1897. But records during the American period already consistently identified the family as using "Marcos" in all documents, which meant that they reverted to the use of their old surname and discarded the use of their adopted, Claveria-decree surname.

Had the family decided to stick with their adopted surname, we would have had a President Ferdinand Romualdez Tabuebue, Jr. today!

Posted by Filipino Genealogist at 9:59 PM