April 27 marks an important event in the city of Lapu-Lapu, specifically, and for most of the Philippines, in general, Today is known as the Kadaugan sa Mactan - Victory in Mactan - the day that is considered by most Filipinos as the first successful act of defiance by a Filipino against a foreign invader. Today commemorates the defeat of Magellan at the hands of Datu Lapu-Lapu of Mactan. 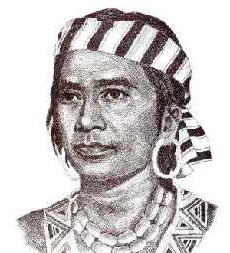 The names Datu Lapu-Lapu and Ferdinand Magellan are perhaps two of the names that majority of Filipinos will never forget among the the pantheon of Filipino heroes and martyrs. Aside from the Philippine National Hero, Dr. Jose P. Rizal, Lapu-Lapu remains one of the few historical figures that Filipinos are proud of. After all, the story of the conquistador Magellan's death at the hands of Lapu-Lapu (or one of his men) is a story that is etched forever in the heart and mind of the Filipino people.

And yet no matter how enduring the legacy of Lapu-Lapu is he also remains one of the heroes in our history to have an incomplete story.

Little is known about Lapu-Lapu's beginnings. What we now know of him comes from Antonio Pigafetta's account of Magellan's voyage and eventual death in Cebu. After the Spaniards left Cebu following the death of their leader we know nothing about what became of the country's first hero. In fact, it is not even clear if his name was Lapu-Lapu or Caliph Pulaku. The latter name would indicate an Islamic root, and some historians have alluded to the possibility that Lapu-Lapu was a Moslem.

Pigafetta's account calls him Cilapulapu, which, in my opinion, is actually "si Lapulapu" thus making his name Lapulapu. Despite the scarcity of records we can still piece together the life of Lapu-Lapu based on oral traditions. Various articles and essays have been written about him with stories taken from families claiming to be descended from Lapu-Lapu. The Pagobo and Baring families of Mactan and the Mundo family of Borbon, both in Cebu province, claim that they are modern-day blood relatives of hero of Mactan. Other oral traditions gathered through the years from various local sources have actually yielded more or less the same information as those coming from the families claiming to be Lapu-Lapu descendants.

In one online article it is said that Lapu-Lapu's father was called Kusgano and his mother was Inday Puti (clearly symbolic names, as Kusgano stands for strength while Puti pertains to purity). He also appears to have a brother called Mingming and a grandmother called Matang Mantaunas, said to be a very powerful ruler in her heyday. Later, Lapu-Lapu is said to have married a beautiful princess by the name of Bulakna (flowers), the daughter of another local chieftain. Their child was called Sawili and was said to be as brave as his father.

I also checked academic write-ups and found two. One was written by Heidi K. Gloria and the other one by Linda Kintanar Alburo. When I was working for UP Cebu's research arm way back 2002 I also read a research by one of my former professor, Ms. Fe N. Reyes, about Lapu-Lapu based on folklore. It is from their write-ups that I base this brief genealogy of Lapu-Lapu.
According to the tales gathered by these writers, the tales about Lapulapu have unearthed a circle of names related to him, among them: Datu Manggal, his father; Matang Mantaunas, his mother; Malingin or Mingming, his daughter; Bulakna, his wife; and Sawili, his son. And while we would expect these oral traditions to put Lapu-Lapu at the forefront of the stories it is apparently Lapu-Lapu's father, Datu Mangal, who appears as the "lead" in most of these tales. These tales also appear to have better sources than the one earlier mentioned above.

These stories do not only tell about the quests Lapu-Lapu had to undergo in order to win the hand of Princess Bulakna, it also tells of the magical tradition that was apparent in the members of Lapu-Lapu's clan. Accordingly, Lapulapu possessed supernatural powers because of his father Datu Manggal’s anting-anting or talisman. Of course, no one was more powerful than the father as he also possessed the power of foresight as well as having a horse that could fly.

But back to Lapu-Lapu. Oral tradition states that though he successfully defeated Magellan, Lapu-Lapu did not come out of the battle unscathed. In fact, he had a serious enough knee wound which made him weak. Later, after a great whirlpool in Mactan, a miracle of the Sto. Niño restored the island and reconciled Lapulapu with Humabon.

Oral history further states that five months after the battle of Mactan, Lapulapu asked Rajah Humabon to help him return his family and himself to his native home, which apparently was Borneo. In the end, Lapu-Lapu left Cebu with three wives, eleven children and, twenty servants. His warriors and other followers to given to Rajah Humabon as a parting gift.

But there is also a more romantic end to Lapu-Lapu's life. It is said that sometime after the battle of Mactan, in his twilight years Lapu-Lapu and Bulakna decided that the time had come for them to leave the world and go on to the next. After making sure their son was ready to rule Lapu-Lapu and Bulakna entered a sacred cave and were never seen ever again.