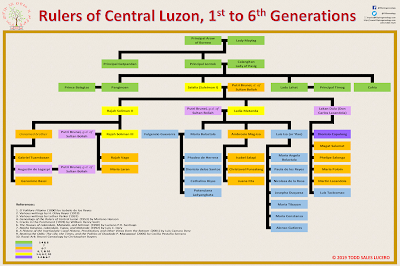 The family tree of the rulers of Central Luzon, that is, the ancestors of Lakandula, Matanda, and Soliman as well as their cousins and other close relatives as mentioned in various sources of research and archival documents, is one of the most fascinating family trees for any Filipino family. While it is a combination of oral tradition and scholarly research and some of the people in the first few generations have been confused by early Philippine historians and chroniclers and may have been doubted by others, the fact remains that this genealogy remains the only genealogy that has been studied and vetted by historians since as far back as the time of Spanish colonization.

This write-up is by no means complete. However, this takes into account all previously written and researched genealogies of the Central Luzon rulers, called by the late Luciano P.R. Santiago as the super-principalia families in Philippine society (Santiago, 1990). It is interesting to note that the usage of the term super-principalia was first coined by Norman G. Owen in his work on the principalia of the Kabikolan (Owen, 1974). As such, the genealogy of families like that of former President and House Speaker Gloria Macapagal Arroyo has been fully traced and documented, thanks to the works of the likes of Santiago, Beyer, Parker, Henson, etc. Many other more recent writers have made use of these scholars' works, but they remain the pioneer in terms of tracing the family tree of the super-principalia.

Generations One and Two

The earliest mention of the ancestors of Lakandula and his family was supposedly in the will executed by Fernando Malang Balagtas in 1589. This will was featured in the works of H. Otley Beyer (Beyer, 1919) and Luther Parker (Parker, 1931). The interesting thing about this will is the genealogy it contains. While Filipino politician and writer Isabelo de los Reyes (Reyes, 1890) and American historian William Henry Scott (Scott, 1978) both questioned the provenance of the will as do many other more recent historians, Luciano P.R. Santiago nevertheless writes that though it is true that there are doubts on the will, the genealogy it contains should probably be considered separately as many of the names it enumerates appear in various old manuscripts (Santiago, 2001).

The first in the family tree was a nobleman called Principal Araw (also Arao). The will of Balagtas as well as later discussions on Principal Araw all claim that he was from the royal house of Borneo. Naturally, this is hard to confirm. The timeline for Principal Araw was sometime in the 1300s A.D., when the Philippines was already under remote influence by the Madjapahit empire. Principal Araw married a local by the name of Maylag, who is also another noble person as she is always written with the title of Lady. Nothing much is said more of these two, except that based on where their descendants happened to have lived they probably settled in Pampanga and Bulacan (Henson, 1953).

Both Gat-pandan and Lontok had children; according to the Malang Balagtas will, Gat-pandan's children founded Ternate, Moluccas. This write-up is interested in the line of Principal Lontok, who had four children: three daughters by the name of Panginoan, Lahat, and Cahia, and one son by the name of Selalila or Salalila or Sri Lela. He was later identified as Suleiman or Soliman I, the founder of the Kingdom of Maynila (Beyer, 1919). These four children were born within the years 1400 until 1478, a time when the Madjapahit empire had started to decline.

Soliman I was married to a Lady Ysmeria and they had at least three sons: Soliman II, Matanda, and Lakandula (Henson, 1953). Although Beyer and Henson made use of a the questionable Balagtas will as source for their genealogy, these personalities were proven to be real by later historians like Santiago and Dery as well as other sources like the tarsilas of Brunei's royal families.

For instance, while Santiago could not identify the name of Matanda's father, he was mentioned in the tarsila of Brunei's royal family as the "Raja of Maynila" who married a daughter of Sultan Bolkiah and his second wife, Putri Laila Menjanai of Sulu (Buyers, 2011).

So clearly, this brings the genealogy full circle. By merging the various genealogies from different sources we get to not just give names to the personalities that are found on archival documents without their names, but also prove and validate the existence of most, if not all, of the people mentioned in Balagtas's will even if its origin is questionable. Another member of the family marries into the Brunei royal family: Augustin (Agostin) de Legazpi was married to another granddaughter of Sultan Bolkiah 26th June 1578, a nephew of Datu Lacondola, of Tondo, in the Philippines (Buyers, 2011).

Tracing down the line further, we get to Lakandula's children. Among his six documented and proven children, only the eldest, Dionisio Capulong, is found in all the documents and scholarly articles about Lakandula's children. Santiago identified 5: Dionisio Capulong, Magat Salamat, Phelipe Salonga, Maria Poloin, and Martin Lacandola. Dery further adds another son, Luis Taclocmao, making the total number of Lakandula's children 6. There are some claims that Lakandula had an older child by the name of Batang Dula. However, nowhere in any of the previous scholarly works or even in the existing archival documents was there any mention or documentation of a  Batang Dula. So, without corroboration of this supposed eldest son of Lakandula, it can be concluded for now that there was no Batang Dula among the children of Lakandula.

Posted by Filipino Genealogist at 11:40 PM