The Argawanon last names ALBER and ALBERT are variants of the Spanish last names of Albert, Alberti, Albertin, and Alberto. Because Alber does not appear in the Catalogo Alfabetico de Apellidos it is very likely that the original intended surname adopted was ALBERT. Curiously, the earliest form that appeared in records was Alber. This is most likely due to the fact that the earliest Argawanons were not yet used to using surnames as also probably due to the illiteracy of the early Argawanons. The name continued to shift from Alber to Albert until the members of the different branches stuck to Albert by the coming of the Americans. As a family the Alberts were one of the smallest in Spanish period Argao and continues to be a small family until today. It also produced three cabezas de barangay between the years 1873 to 1890. Click here for more.

A full history of the ALBERT family up to the present is available. Please contact the genealogist if interested.

Leonardo Cipriano Alber was obviously closely related to Bonifacio Ygnacio, though the relationship could not be established for now. He was born on October 5, 1822 and his descendants carry the last names Albert and Artiaga.

ALBERT Family Name Distribution in Argao (as of 2011) 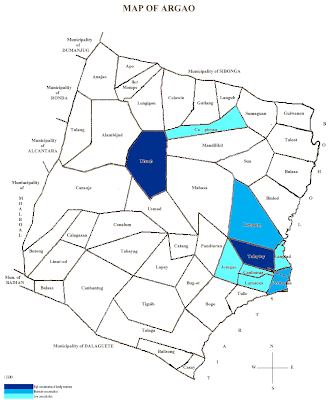 Posted by Filipino Genealogist at 10:02 PM