How President Ramos became my Cousin 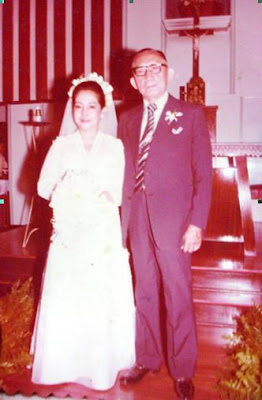 (Wedding of Tita Lee Lucero and Ambassador Narciso Ramos)
Today, March 18, is former president Ramos's birthday. I have been trying to trace his family tree for a year or so now as I find his genealogy a little closer to home; my mom's first cousin, Alfonsita Galeos Lucero - Lee to the family - married former congressman and ambassador Narciso R. Ramos. Tita Lee's marriage to the widower Narciso was, to the best of my knowledge, a happy union. So my mom's cousin then became the stepmother of FVR, who at that time was the armed forces chief of staff, and to Leticia Ramos-Shahani, who was a senator. They, in turn, became my step-cousins.
I remember my grandparents' house in Cebu being very busy during election season. When FVR became President Aquino's handpicked successor in 1992 my family went all out in its support for our step-cousin.
Fidel Valdez Ramos was born to Narciso Rueca Ramos and Angela Marcos Valdez. On his father's side he was a Pangasinense, on his mother's side he was Ilokano. His paternal grandparents were from Asingan, Pangasinan while his maternal grandparents were from Ilocos Norte. His grandmother, Cripina Marcos, was the sister of Fabian Marcos, grandfather of former president Ferdinand E. Marcos.
Narciso Ramos was Foreign Secretary during President Ferdinand E. Marcos's government and served from 1966 to 1968. Before joining the foreign service, Narciso served five terms as a member of the Philippine Legislature. He was also a Philippine Ambassador to Taipei.
FVR's mother, Angela Valdez Ramos, was active in her participation in the women's movement of her time, joining the Time Investment Group which later became the Young Women’s Christian Association (YWCA) in the Philippines. She was also at the heart of helping prisoners of war in Tarlar and was later involved in more women and social causes.
I have already posted FVR's pedigree chart in a previous write up. Hopefully, I would be able to add to this more as time goes by. In the meantime, anyone interested to read more on the life and times of FVR's mom Angela can purchase the book In A Class Of Her Own: The Life And Times Of Angela Valdez Ramos, written by Melandrew T. Velasco.
Posted by Filipino Genealogist at 3:31 AM